Origin and Suggestions regarding tank setup

This species comes from the waters of Paraguay, South Brazil, Argentina and Bolivia. The aquarium where you keep these Tetras should be about 50 cm (~ 20 inches) high and well planted, so they will have place for hiding, but with free swimming areas as well. The water should have a temperature from 20 to 26°C (~ 68 - 79°F) and the hardness level should be between 5 and 19°N dGH (89.29 - 339.29 ppm, 1.79 - 6.79 mEq). pH should be about 7, but this can vary a bit being a bit acid or alkaline too. When discussing tank setup it should be mentioned that the aquarium, ideally, has to be as large as it can be, however bear in mind Black Skirt Tetras prefer a deep one much more than shallow ones as they do like a lot to swim through the whole water column vertically.

Generally speaking it is not difficult to keep this species when it comes to compatibility as they are peaceful and shoaling fish which means you should keep them in groups of at least 10 specimens per tank, however that also depends on the tank size (i.e. if your tank holds 200 litres which equals to 53 US gallons or 44 Imperial gallons, you can easily house even 30 or 40 specimens there). Black Skirt Tetras are a bit fearful, and it is important to keep them in a busy place when they're juveniles otherwise they'll become stressed out even when a person walks near their aquarium once they reach adult age. Not being a predator in the nature, in fact they are prey fish, this species will get along with other similarly sized tetras and other fish that are peaceful; Thus consider raising Bloodfins, Neons, Blue emperors, etc. with these. Raising Acara's or aggressive cichlids with Gymnocorymbus ternetzi has to be avoided as continuous stress will make fish more prone to diseases and they'll feel uncomfortable.

The Black Skirt Tetra has a flat body, with high silver and black colouration which shines in the aquarium. When this tetra gets scared, its colours usually disappear, but after a while they reappear. The dorsal, tail and anal fin are black. On the silver body there are three short stripes, one through the eye and the two remaining behind the gills. These stripes can be straight or wavy. Interesting is a small dorsal fin. When this fish is given enough and proper diet it will grow up to 6 cm (2.36 inches) in length. Males are smaller and darker than females which have lighter colours. There exist albino forms of Black Skirts – the fish is all white, also known as White Skirt tetra and a long-fin form. 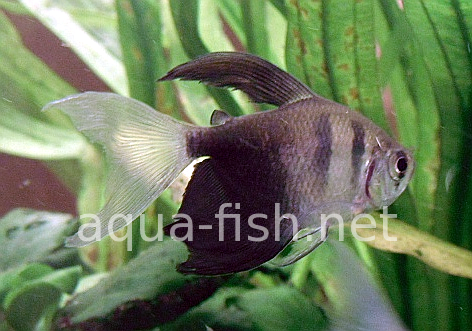 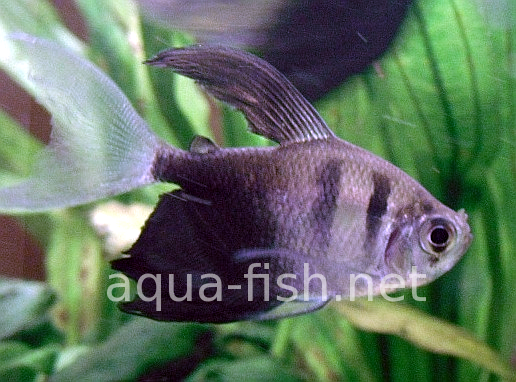 The Black Skirt Tetra is easy to breed in soft and slightly acidic water. They lay eggs on plants with soft leafs. At one breeding they can produce over 1000 eggs and if you have chosen two fish which like each other, the success is secured. After the eggs are laid the parents should be removed from the breeding tank. The eggs hatch after 36 hours and at a temperature of 26°C (78.8°F). After 7 days the fry can eat and what's best is to feed fresh hatched Artemia salina. After approximately 10 days the newborns should be moved into a 50 litre (~ 13 US gallons, 11 Imperial gallons) tank, so those little fishes can grow and still have enough space. Of course, newly born specimens tend to grow fast and in a case you are not an experienced breeder, the number of new fish could be a problem for you. At this stage it is best to leave the strongest survive while the weak specimens die which is also the reason to house a few snails in their tank as snails will consume dead ones. With over 500 new fish the survival ratio can be only 10% and one will still have 50 of these tetras, and it'll still be necessary to find them new home.

These Tetras will eat almost everything, but it is important to feed them calmly as they're very sensitive to any distractions, fast movements, and loudness. Therefore repeat the same movements when feeding them which will make the fish get used to the routine and they will know that feeding time has come and will be prepared. The shape of their body tells us that these Tetras eat food which swims in the water only, however they are capable of eating food from the surface. Usually, those are fast movements and you only see that the food is gone and the surface is moving. They are incredibly fast.

Basically, feed them meaty and vegetable-based granules, flakes and sometimes frozen food too. Larvae and brine shrimp should be offered to these fish once or twice a week. Remember, if they're hungry it might seem like housing small Piranhas instead of these peaceful tetras during the feeding time.