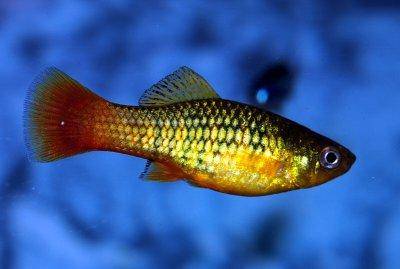 Platy will eat almost anything that fits into its mouth. Give them high quality flakes, granules and from time to time frozen or live food like daphnia, bloodworms or brine shrimp to achieve the best health and brightest colouration.

Their natural habitat is from southern Mexico to Honduras. They live there in creeks, springs, canals, ditches and swamps, however nowadays they are to be found in some US states too, even Hawaii.

Platy fish is a pseudo-livebearer witch means the female does not lay eggs, but her eggs are fertilized and hatch inside of her. Then when the little ones are ready, she gives birth to fully developed small fish. For this to happen you simply have to put at least one male and one female into a tank and wait. That is all. One female can give birth to about 60 little fish every 5 weeks which is often the cause of overpopulation. The fry can be fed by crushed flakes, the smallest granules, small brine shrimps or special fry food.

They can live from 6 months to 3 years. It all depends not just on the conditions you have in your tank, but also on the source of your fish. Since they are very popular in the aquarium trade, they are often inbred which is the cause of poor health of many specimens.

Platies are very hardy but even so, never put them into a tank with soft water and low pH. Also pay a lot of attention to the filtration system as decaying biological material lovers the pH and don’t use driftwood as a decoration. Tiny amount of aquarium salt will do them good too. The minimum size of a tank should be 60 litres or 16 gallons for 5 or 6 fish. They will love a tank with a healthy growth of plant, among which they will feel secure and protected.

Any non-aggressive fish will fit, just avoid the big-mouthed ones. Also platies may annoy some of their tankmates, especially those with long fins. Never forget to keep them in shoals. Since males often harass their females, keep two females per every male to minimize the stress males will cause to females by their over-eagerness. Plants will also be a great help, because females will have more places to hide from males.

Xiphophorus maculatus comes in various forms. There are almost thousands of various colours you can get them in and by breeding forms, you always can get some new ones. Most common are red, black, blue, white, yellow, orange, pink, any shades of these colours, or mixes and there also are some long finned platies too. But the wild form itself is very rare. Since their genetic system is very well studied, they are used for research in various scientific disciplines.

Thanks a lot to halkor for pictures. Other were bought from jjphoto.dk.