Caring and Breeding of Nothobranchius rachovii

Advice by Susan, keeping fish since 1996

This page explains how to take care of Nothobranchius rachovii including feeding and breeding demands along with tank requirements. You're welcome to ask questions or share experiences - use a form at the bottom of this page for this purpose, please!

Nothobranchius rachovii belong to a large group of fish commonly referred to as “Killifish”. These fish get this name from their ability to survive extreme variations in their habitats which has meant that their breeding habits and lifespans have evolved to ensure healthy populations in the areas that they can be found. The word “Killi” is derived from the Dutch word “kilde” which can be translated to mean a creek or small puddle of water. This is apt as the Killifish live in small water ways that are prone to drying out and the eggs have the ability to survive periods of drought only hatching when the wet seasons return to provide a new generation of adults ready to breed into the next season and continue the cycle.

Nothobranchius rachovii are an annual Killifish, they only live for a year so the need to breed is of high importance and the adults develop very quickly to meet this demand. The males display bright iridescent colourations that can change as the fish swim from dark blues to a brighter blue dependant on the observation angle and the females tend to have a drabber colouration comprising of a duller brown with a yellowish tint, their fins are clear whereas the males will display the same body colouration in their finnage, the scales of the fish will also have a red edging giving them the appearance of displaying bands down the body area.

These fish do not grow very large, adult males can reach a size of up to 50 mm (1.9 inches) and as stated above have a very short lifespan, the smaller size of these fish does mean that they can be kept in smaller aquariums making breeding projects more viable in monetary terms and they are generally of a peaceful nature meaning that they can be kept with other similar sized species that possess the same nature and prefer the same water conditions.

Their natural habitat is the African continent where many hundreds of species of Killifish can be found, this particular species was first imported into Europe in the mid 1920's where a few specimens were brought back by an aquarist based in Germany. Earlier attempts to breed these fish prior to this were unsuccessful as little was known about the habits and conditions required by these fish for a successful project to be undertaken.

Recently Killifish have taken a rise in the popularity stakes and nowadays many are kept as pets as well as for breeding projects, Killifish eggs can even be purchased over the internet and despatched via mail to your home making them accessible to everyone.

As mentioned above these fish are easy to care for and not very demanding, this should not be interpreted as not requiring much care and attention, all fish require good water conditions so the aquarium should be cycled before adding these fish and adequate filtration provided. They do not require large aquariums, aquariums as small as 5-10 gallons (roughly 20-40 liters) will suffice for a small group but be aware that the males can be very territorial towards other males so it is wise to keep one male with several females. The pH of the water should be between 6.5 - 7.2, adding peat to the filter will aid to keep the pH at these levels. The lighting should be subdued, these fish do not like bright lighting and always perform partial water changes on a regular basis.

Plants should be added to the aquarium along with small rocks or pieces of bogwood etc. to provide hiding places if the fish require them, Nothobranchius rachovii will spend most of their time in the lower levels of the aquarium so make sure that any décor added does not have any sharp edges and any wood added should be cleaned thoroughly to prevent the possibility of adding anything to the aquarium that can cause infections or diseases.

Unfortunately these fish are very prone to the fungal disease “velvet” so adding a small amount of salt to the water will help to keep this at bay but do not add too much, one tablespoon per 5 litres (1 Imperial Gallon, 1.3 US Gallon) of water is plenty. Provide some spawning sites by adding peat moss to the bottom of the aquarium, this will replicate their natural habitats and give the eggs somewhere to settle in, make sure it is clean before adding it to the tank and change the peat moss every 2-3 months to prevent it from becoming a home for unwanted bacteria.

The temperature of the aquarium can vary with each keeper as Nothobranchius rachovii will accept a wide range between 22-29 ° C (71-85 ° F), setting the heaters to a steady 26 °C (80 °F) will keep you in the safe range on a permanent basis.

Often keepers may only keep these fish for a few months rather than the full year, you cannot guarantee the age of the fish when you receive them from a supplier so they may have already served half of their lifespan before entering your aquarium, this is why some keepers prefer to breed their own stock. Symptoms that can suggest the end of the lifespan is nearing can be loss of colouration and slowing down with the feeding, there is nothing that you can do about this but if you are prepared for this by having new stock at hand you can start the cycle all over again.

Feeding this fish should be easy but you do have to be careful as they have very small mouths and it is very easy to overfeed these fish. It is far better to supply small meals 2-3 times per day rather than attempting to feed one large meal once a day, overfeeding will lead to health problems and can cause digestive blockages as a result. Nothobranchius rachovii fair better when kept on a diet of live foods, use small worms such as white worms, grindal worms or to vary the diet feed these fish with brine shrimp, you may be tempted to supply commercial flake foods which can be fine for some species for Killifish but in this case, live foods are far better and a lot more nutritious.

Nothobranchius rachovii will attempt to spawn in the aquarium without your help, as mentioned above they have a very short lifespan so need to breed to keep their species going, that is their main aim in life.

In the “caring for” section it mentions adding peat moss to the aquarium to provide spawning sites, the eggs can be moved out of the main aquarium whilst in the peat moss allowing you to control the eggs without the risk of the new fry being eaten by parent fish or other tank mates giving you a higher success rate.

Of course if you do not wish to breed the fish straight away you can actually purchase Killifish eggs online where they are delivered in the dormant state and can be hatched directly in your own tanks. The peat moss that you use can be placed inside small containers in the aquarium, this allows movement of the eggs to be much easier and once the eggs are removed from the water you should gently squeeze the peat moss to drain the remaining water out as you are now going to replicate nature i.e. replicate the natural dry season where the eggs become dormant.

The peat moss should be placed inside a plastic bag which needs to be sealed, using the freezer bags with the slide seal is ideal or you can use ordinary food bags but roll the bag up to prevent air entering. The eggs and moss can be left in the bag for at least 3 months, keeping the bag at room temperature and once this time has elapsed it is now time to replicate the start of the rainy season hopefully bringing about the hatching process.

Carefully unseal the bag and place the peat moss in a container, make sure that the moss is spread evenly so that it can soak up the water evenly and add some water with a little salt to the container.

The whole hatching process will occur very quickly, even after a few hours the fry will start to emerge from their eggs, all of the eggs should have hatched after a 48 hour period.

The fry can be fed on a commercial egg layer fry food or you can feed them on newly hatched brine shrimp once they are free swimming, development of the fry is at a fast pace as long as you feed them with a nutritious diet, colouration can be displayed after 6 weeks.

Due to the short lifespan the fish develop to a breeding age much earlier than other species of fish all ready to start off the cycle once again. If possible it can be wise to separate the sexes initially until they have developed fully, this allows the fish to build up their strength before starting to breed which can be a stressful time for the females.

Due to the nature of this breeding process, postage of the eggs is much easier and is now a common practice, personally I think it is much more rewarding to purchase the adult fish and start the breeding from scratch but that is a personal view and other keepers may wish to start directly from hatching of the eggs. 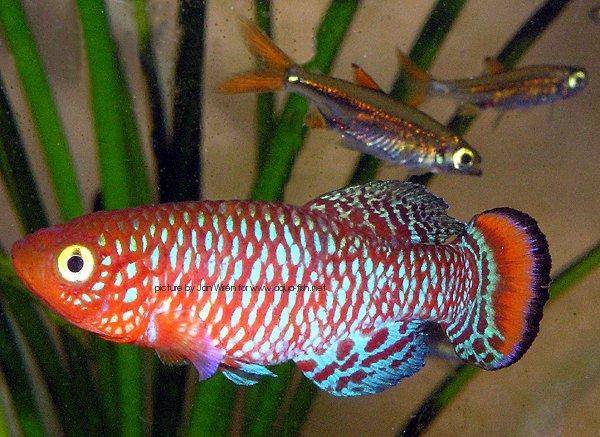 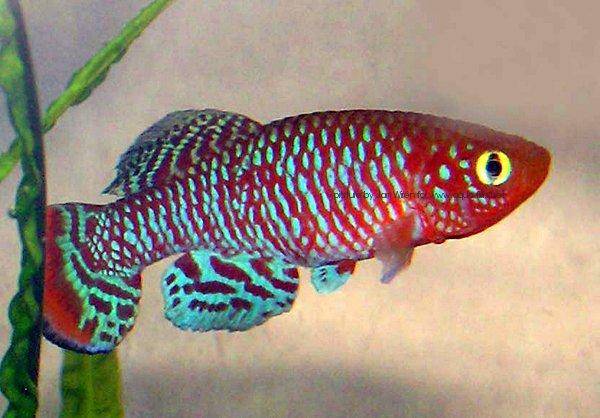