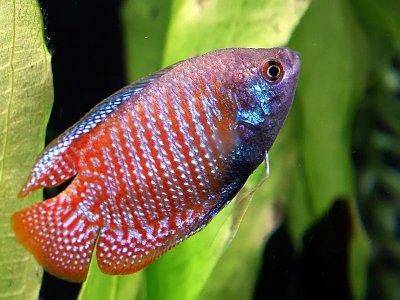 This fish is to be found in the waters of Asia- notably Pakistan, Bangladesh and India.

The Dwarf Gourami makes a great addition to a community setup, most specimens for sale nowadays are bred specifically for the market, wild specimens would make for a rare occurrence but this does have the benefit that aquarium bred fish tend to be hardier than their wild cousins. They naturally are to be found in vegetated areas of water so a planted aquarium is ideal but keep the water flow low as they do not like strong currents. They can be found in a few colour varieties, this is probably due to selective breeding, including the traditional blue and red striped, a blood red morph and even a neon blue.

They do have a timid nature but kept in pairs and plenty of hiding places provided should help to overcome this. The water quality should be kept as high as possible, this is not too difficult by performing regular water changes as they will be fine in smaller aquariums that can hold at least 15 gallons of water, their adult size for aquarium specimens will rarely reach over 3 inches although their wild cousins will be slightly larger.

The Dwarf Gourami is classed as omnivorous so should accept all foods that are offered. Use a quality flake as their staple diet but this will need to be supplemented with some feeds comprising of live or frozen foods such as brineshrimp or blood worms, algae tablets will also be nibbled on.

Males tend to be slightly larger than females once mature and will display a brighter colouration. Most males will also develop extended finnage.

The Dwarf Gourami as expected are bubble nest builders. It is best to use a small breeding tank that is filter by an air sponge filter to keep the water flow low and raising the temperature of the water can often induce spawning. Adding some plants to the breeding tank will aid the process. It should be noted that the male can become aggressive towards the female after spawning so make sure that you can separate the fish before undertaking a breeding project.

The female should be added to the breeding tank first and conditioned until she becomes plump with eggs, at this stage the male can be added. The male should immediately begin to make a bubblenest at the surface of the water and surprisingly it is the female that will nudge the male towards the nest rather than the other way around. The pair will intertwine during spawning and once the eggs are released and fertilised it is time to remove the female as the male will become highly aggressive towards her. The eggs will hatch after approximately 36 hours and once the fry are free swimming it is advised to remove the male so that he will not predate on the fry.

Thanks to Jose J. for allowing us to use his picture. Also thanks to Cyberraga.