Freshwater Angelfish: Pairing, Spawning, Hatching and Breeding as a Whole

This page is an ultimate guide on breeding freshwater Angelfish. Use a form at the bottom of this page to tell us your experiences or ask questions in case they aren't answered on this page!

Pterophyllum Scalare is a cichlid fish that is in high demand in the aquarium industry due to their unique beauty and unusual personalities. This fish is more commonly known as the “Angelfish” and it is known to come from rivers in Peru, Columbia, and Brazil. Angelfish are unusually shaped for cichlids because they are laterally compressed with round bodies and elongated triangular-shaped dorsal and anal fins. These egg-layers form monogamous pairs and are wonderful parents in the wild as most cichlids are. Although, it has been observed through captive breeding that angels are loosing their parenting instincts and tend not to care for their young as diligently as do the wild versions of themselves.

It is difficult to determine the sex of immature angelfish. To improve the odds of finding a suitable pair it is recommended to start with about 6 or more juvenile angelfish. Be sure to choose quality, hardy specimens with good color and finnage. This allows the spawning pair a chance to find each other naturally. A stronger bond is created among a pair of angels when they are allowed to select their own mate. Angelfish become sexually mature between 6-12 months of age. Once a pair is formed this couple will remain monogamous for the extent of their breeding capabilities. If one mate is removed it has been observed that the remaining angelfish becomes disinterested in breeding with any other mate.

Angelfish thrive in soft water that is slightly acidic to neutral in pH between 6.5 and 7.0. Although they have become a highly adaptable species being less sensitive toward varying water conditions, the preferable water temperature is between 78-85ºF. Using a heater is recommended for water temperature stability. For one pair of angels, it is recommended to have at least 20 gallons of water, 29 gallons are even better. In order to condition a pair of angels they will need to be feed high-quality foods that contain high amounts of protein. Once ready to spawn, the sex of the fish can be determined by looking at the ovipositor. The male’s ovipositor will be smaller and rounder than that of the female whose tube is wider so that the eggs may pass through. The couple will proceed to clean and prepare a surface on which the female will lay her eggs. The female lays her eggs in a line upon vertically placed rocks, leaves, pipes or logs and the male follows behind to fertilize them. A female will lay as many as 1200 eggs in a single spawning but only if she is fully mature and in good condition. A pair will spawn until they are a little over 3 years old, at which time they will lay less and less eggs until they cease to lay anymore. If the eggs are removed directly after the fertilization process the pair will proceed to spawn again in as little as a week’s time. According to some breeders a pair is capable of spawning every 7-10 days although some pairs may take up to two weeks. 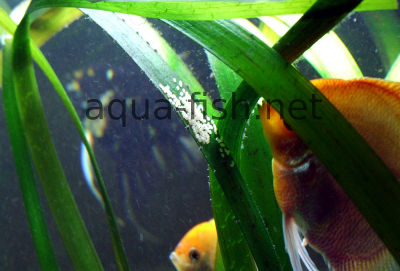 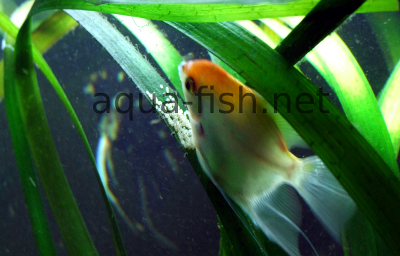 Assuming the spawning couple are wild caught angels, who still retain their parenting instincts; if the eggs are not removed from the vicinity, the parents clean the eggs removing any that aren’t viable. The male and female will take turns fanning the eggs with their fins to ensure fresh water movement around the brood until they hatch. Once out of the egg the fry will survive by absorbing their yolk sacs. When the fry have completely absorbed the yolk sacs they become free-swimming and are finally ready to eat newly hatched brine shrimp, microworms or powdered fry food. The protective parents will move their fry around in order to protect them from danger.

When angelfish are bred in captivity, they tend to not be as great parents as when they breed naturally in the wild. For this reason some breeders decide to artificially hatch angel fry by removing newly fertilized eggs and placing them in separate containers. If you choose to separate the eggs, be careful to keep your distance from the parents because they do retain their protective instincts and will not hesitate to turn their aggression towards your hands. Be careful while moving the eggs, not to keep them out of water for too long because they are quite delicate. Place them in a container of soft, dechlorinated water that is the same temperature and pH as the water you took them from. This is to keep from disturbing their development. Temperatures closer to but not exceeding 85ºF will increase the amount of eggs that will hatch and softer water will contribute greatly to proper development of the embryo living within it. Harder water has more elements dissolved in it so the particles are larger and many are too large to pass through the membrane of the eggs in order to oxygenate them. Pure reverse osmosis or very soft water is ideal for hatching eggs. Another important step in hatching angel-fry artificially is to protect them from fungal and bacterial infections. This is usually the job of the angel-parents but when taking them out of the equation this duty then falls upon you. Hydrogen peroxide or methylene blue can be used to help contain these types of infections. Angelfish eggs are also light sensitive so the tint in the water from the methylene blue can also help to shield those harmful rays. Once the fry are hatched you will no longer need the treatment of hydrogen peroxide or methylene blue.

After the fry have hatched out of their eggs they feed off the yolk sacs for approximately 5 days or until they are fully absorbed. Once they become free swimming they are ready to eat twice daily, meals of newly hatched baby brine shrimp, microworms, or fry powders. Be sure not to over feed them because they will eat as long as food is available to them. Be sure to complete frequent partial water changes of about 20% being careful not to siphon the tiny babies. After 3 to 4 weeks the babies take on the appearance of the angelfish that they are and will finally be ready to start eating crushed flake food. Be sure to continue feeding them a highly nutritious diet for health reasons as well as fin and color development. Happy, healthy fish will develop gorgeous color and fins.

The most common color of angelfish is the silver angel, a.k.a “wild type”. This color strain is most commonly found in the wild and is the strain from which all the different colors and fin-types are bred. As this silver “wild type” are bred, dominant and recessive genes become apparent through the different color combinations and finnage exhibited by the offspring. The combination of genes inherited from the mom and dad angels can result in numerous possible strains of angelfish. A few of them are: 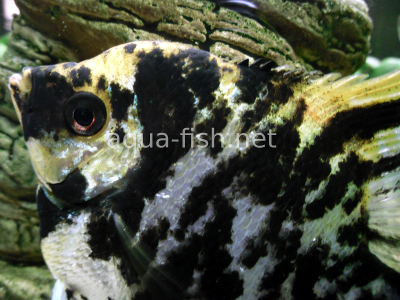 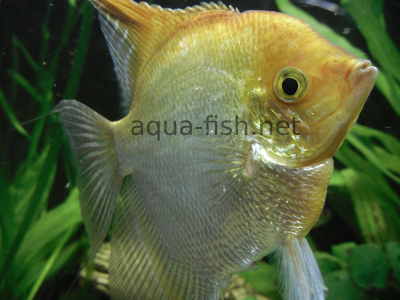 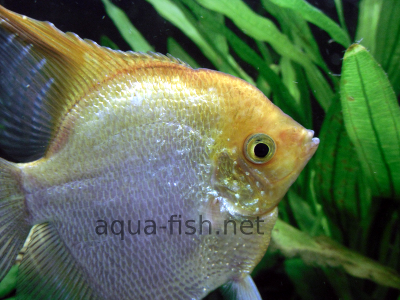 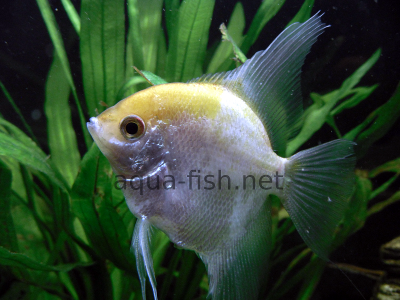 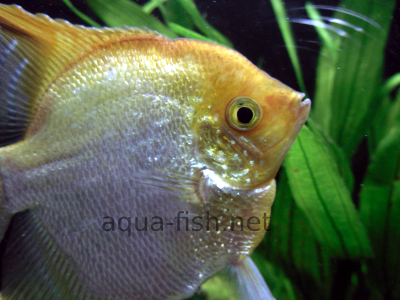 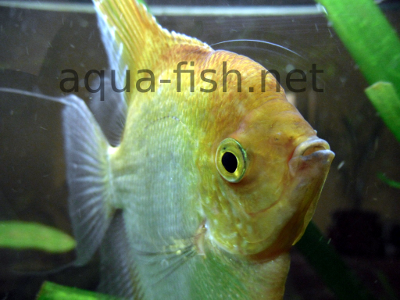 With so many different gene-pairing possibilities you never know what type of angelfish you will end up with. Some strains are more common than others and some types are hardier than others. No matter what the outcome, breeding angelfish is an interesting and fulfilling process. 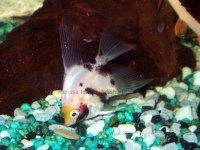 This article is using some citations and information from the below-mentioned source.