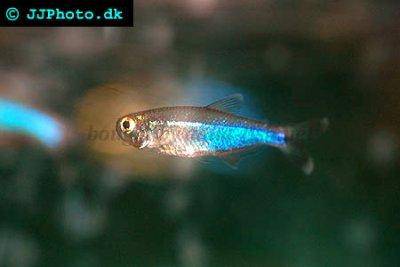 The Blue Tetra is to be found naturally in Peru.

With correct water conditions Blue tetras should live for 3 years.

The Blue Tetra should be kept in a larger aquarium than other tetras (no less than 30 gallons), as they can become aggressive if confined to a smaller tank. Hiding places and the addition of plants will be welcomed by these fish. Boehlkea fredcochui are middle swimmers that will rest in the night hours. Do not keep Blue tetras with other fish that have flowing fins as they do have a reputation for being fin nippers. This mostly occurs during feeding times. If they are kept in large enough groups the fin nipping should subside but make sure that the aquarium is large enough to house the fish. These fish should never feel confined the aquarium should have a water volume of at least 30 gallons, they will still show some aggression to each other but if in too small an aquarium the aggression will spread to other tank mates.

They are a very active species so open swimming spaces must be provided, any planting should be confined to the sides and rear of the aquarium, the lighting should be dimmed, floating plants will assist with this. It is advised to keep other more peaceful species of tetra to gain some experience before attempting to keep these fish due to their aggressive nature.

As with most tetras, a staple diet of flake of small pellet food should be given. Additional treats of brine shrimp, blood worm and small live foods will be readily accepted.

The male and female will have the same coloration but the female bodies will be plumper than with the males.

As of yet there is no record of breeding in captivity, but it is believed that Blue tetras prefer to lay their eggs on the underside of broad leaved plants. They will follow the breeding habits of their close cousins in the wild, this means that the parents will see the eggs as a food source but in natural waterways the waterways are obviously a lot larger than confinement of an aquarium so the fish tend to leave the eggs alone as they go about their daily travels. No parental care is shown and the fry once free swimming will survive on micro-organisms in the water.