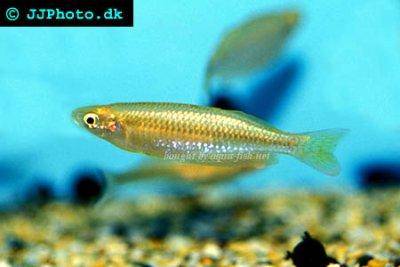 Slender rainbowfish thrives on algae based flakes or pellets. Meaty foods should also be supplied in the form of blood worms or brine shrimp. Mysis and shrimp pellets will also be accepted.

Australia; Slender rainbowfish are to be found only on the northern tip of Western Australia.

Spawning mops or plants should be added to the breeding tank. The parents will spawn easily if conditioned on meaty foods. Once they have spawned remove the parents and feed the fry on Infusoria initially. When they start to grow, they can be fed on crushed algal flake or newly hatched brine shrimp.

The expected life span for Melanotaenia gracilis is 5-8 years.

Melanotaenia gracilis are a relatively rare species in the aquarium hobby, especially outside of Australia. Hiding places and shelters are a must in the tank; floating plants will also put these fish at ease. The water should be neutral to slightly acidic.