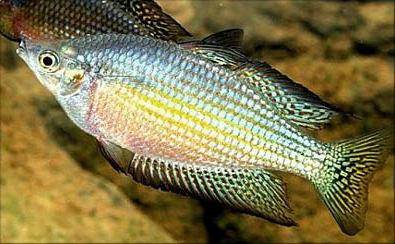 The desert rainbowfish originate from Oceania namely the Australian continent where they inhabit small waterways and small pools which are based in desert regions and can be prone to water levels dropping drastically during periods of drought. These areas are based in New South Wales, Queensland and the Northern territories.

Rainbowfish are extremely popular in the aquarium hobby and this species is no exception. They belong to the family of Melanotaeniidae along with many other rainbow species and their Latin name is currently Melanotaenia splendida tatei although they were formerly known as Nematocentris tatei. They have been discovered since the end of the 19th century and soon became an import into the aquariums by early fish keepers. The desert rainbowfish fish is not the largest species of rainbows with mature specimens reaching an adult size of up to 10 cm (3.9 inches) but most captive specimens tend to mature out at a slightly smaller size.

If cared for correctly the desert rainbowfish should have an average lifespan of at least 5 years.

These fish need to be kept in small groups as they are a very social fish. Because of this it is advised to use a larger aquarium of approximately 4 feet (120cm) in length and at least 18 inches (45cm) in width. They are excellent jumpers so a tight fitting lid should also be used to prevent this and keep the water well oxygenated with careful positioning of the filter outlet nozzles towards the surface to increase gaseous exchange. Small well rounded gravel is ideal for the substrate and the addition of some live aquatic plants will make these fish feel more secure. However they do require open swimming spaces so make sure the planting is confined to the rear and sides of the aquarium. Higher to medium lighting levels can be used and keep the water temperature in a range of between 24-30°C (75-86°F), the lower of the range being preferred. The pH should range between 6.5-8.0 and keep the water quality high by regular water changes of at least 10% weekly.

Not a difficult species to feed once settled into the aquarium but they must be given a balanced and varied diet. Use a quality commercial flake or small pellets for the staple diet but this must be varied with meaty foods and also extra vegetable matter. Brine shrimp and blood worms are ideal for the meaty foods and spirulina or algae wafers can be used for the extra vegetable matter.

Mature males display a much brighter colouration and this flows into the finnage. Mature females will always have clear finnage.

There are no reliable reports of the desert rainbowfish breeding in the aquarium but it is known that in the wild they are egg scatterers and spawning takes place in the warmer months of the year. It is believed that approximately 100 eggs are scattered with each spawning and neither parent fish will show any parental care. Spawning can also be triggered after excessive rainfalls, this can be replicated in the aquarium by performing water changes with cooler water.