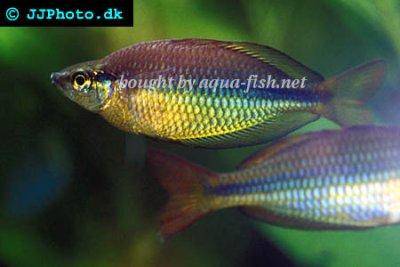 Regal rainbowfish are omnivores, feed them quality flakes or pellets, but also include some live foods such as blood worms, brine shrimp and white worms.

Streams and waterways across Australia.

The breeding tank should be set up with a sponge filter and add either fine leaved plants or a spawning mop. The male will display an intense coloration during spawning and guide the female to the spawning site. If a spawning mop has been used it should be moved to another tank, if not move the parents as they are prone to eat the eggs. The eggs will be laid over a number of days so keep a watchful eye on the tank. After a week the eggs should hatch and the fry can be fed on newly hatched brine shrimp.

Melanotaenia trifasciata do well with similar sized tank mates but may bully smaller fish. They are best kept in a species only tank as this species have been known to cross breed with other rainbow fish species.