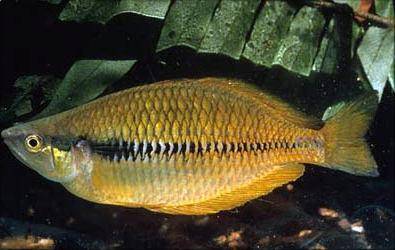 Yakati rainbowfish will accept all foods offered, quality flake and pellets should form the staple diet, weekly treats of blood worm or brine shrimp should also be given.

New Guinea; Yakati rainbowfish are to be found in the mountain streams.

There is insufficient data available to sex Melanotaenia angfa.

As of yet, this species has never been bred in the aquarium, it is believed that in the wild it spreads its eggs in the substrate and amongst the plants. If trying to reproduce this in the aquarium, add hiding places and a spawning mop. Once the eggs are laid the mop should be removed to another tank or container for hatching. Rainbow fish fry are very small; feeding them on Infusoria would be the most suitable food.

It is believed that Melanotaenia angfa has a life span of 10+ years.

There is not a lot of data available on this species; it has yet to be introduced into the aquarium hobby in the same level as the other rainbow fish species.