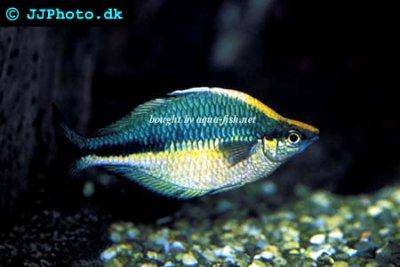 Lake kutubu rainbowfish are omnivorous, feed with quality vegetable based flakes or pellets. Live foods should be given as a treat on a weekly basis. Blood worms and brine shrimp are ideal for this.

When the males are mature they will have deeper bodies than the females and display brighter coloration.

Spawning mops or plants should be added to the breeding tank. The parents will spawn easily if conditioned on meaty foods. Once they have spawned remove the parents and feed the fry on Infusoria or egg yolk initially. When they start to grow, they can be fed on crushed algal flake or newly hatched brine shrimp.

The expected life span for Melanotaenia lacustris is 5-8 years.

Melanotaenia lacustris are classed as a peaceful species but some adult males may prove to be fin nippers. They should be kept in small groups with a well planted tank. Open swimming spaces should also be allowed for.

Bought by aqua-fish.net from jjphoto.dk. Other pictures were provided by Michael. Also thanks to Jonathon Whipple.