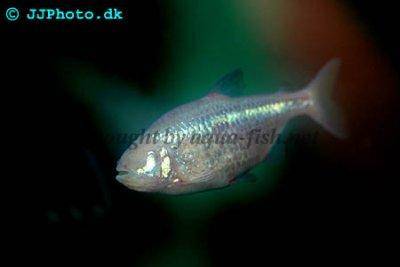 Where the species comes from: North America

Originally the Blind cave tetra originated from Mexico where it inhabited the caves hence eyes became useless to this species and over time they evolved into what they are today. They have interbred with other tetra species and these hybrids can be found further afield in Central America.

The Blind cave tetra has proven to be extremely popular with fishkeepers over the eyes probably due to their unusual appearance, they are quite a hardy species making them easier to care for than more delicate species and they do not grow to a large size meaning that medium sized aquariums can deal with a small group of these fish. Adult specimens will grow to an average size of 3-3.5 inches and they are best kept in groups of at least 6 specimens. They navigate around the aquarium by means of sensors on their lateral line which is very effective.

The average lifespan for the blind cave tetra is 3-5 years although there are records of some specimens outliving this age when given optimum conditions.

A small group of these fish can be housed in an aquarium that is at least 2 feet x 1 foot (60cm x 30cm) but if you are keeping a larger group with other tank mates it may be wise to house them in an aquarium that measures 3 foot x 1 foot (90cm x 30cm). Choice of tank set up is purely up to the keepers as these fish are quite happy in a planted tank, no plants or any other form of set up. The water temperature should range from 20-25°C (68-80°F) and the pH should range from 7.0-8.0. Like all fish species the tank should be fully cycled before adding the Blind cave Tetra and a suitable filtration system should be used for the water volume of the aquarium.

The Blind cave tetra is classed as a peaceful species but like most Tetra species they can sometimes nip at fins of other tank mates. This is not as severe as with other Tetra species and usually occurs at feeding times when they are searching for food.

Not a difficult species to feed, they should accept all foods offered. For a balanced diet it is best to feed with a high quality commercial flake or very small pellets and this should be varied with treats of live or frozen foods such as brine shrimp, blood worms, or artemia.

Not a difficult species to breed, set up a separate breeding tank and add well conditioned parent fish. An air driven sponge filter should be used for great control of water flow and ease of maintenance. Marbles or mesh should be used in the substrate as they are egg scatterers and will also predate on the eggs if allowed to reach them. Spawning usually takes place in the early hours of the morning and once the eggs have been scattered remove the parent fish.

The eggs will hatch very quickly, usually within a 24 hour period but the fry will not require feeding until they are free swimming as they will consume their yolk sac initially.

Once free swimming they can be fed on infusoria until they are large enough to accept foods such as newly hatched brine shrimp.