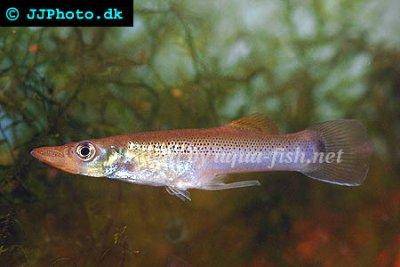 Belonesox belizanus can be found in Central American rivers in countries like Nicaragua, Guatemala, Honduras and El Salvador.

The Pike Livebearer has a lifespan of more than 5 years.

The Pike Livebearer inhabits waters that are poor with oxygen and dense with weeds. Older specimens tend to be more aggressive and should be kept with larger fish that can hold their own against this pike.

These fish should only be housed with species of a similar size, preferably they should be kept in a large aquarium that is a species only set up. Lots of plants should be added and the use of floating plants will help to diffuse the lighting as they prefer to inhabit waters that are dimmed, bright lighting can spook the fish and make them unsettled. They can live in freshwater or brackish conditions but for adult specimens it is best to provide a brackish aquarium set up with a ratio of one tablespoon of salt per gallon of water volume.

These fish are closely related to guppies and swordtails despite their very large adult size and their diet, they breed in the same manner and will produce many batches of fry throughout the year so expect this when considering purchasing these fish.

This carnivore is a highly skilled predator. Pike livebearers eat live fish, insects, worms and crustaceans. They will accept dried and frozen meaty foods in captivity. It can be hard to keep an adult fish well fed especially if you are using feeder fish, they do have a voracious appetite so expect the food bills to be quite high compared to feeding other species of carnivorous fish.

Pike livebearers are a very easy species to breed, they can produce up to 120 young with each batch but some salt should be added to the breeding tank to provide the correct conditions. The number of fry can also vary dependent on the age of the female. They are best moved to a growing on tank to prevent the parent fish from being tempted to prey on them but be prepared to keep the fry into different tanks as they develop, the larger fry may turn cannibalistic towards the smaller fry. They can be fed on newly hatched brine shrimp or micro-worms until the are large enough to accept the same food as the adult fish. Feeding the fry is an enormous task as they have a constant hunger and breeding these fish is no small task, the easy part is getting them to spawn. The hard part is keeping the fry well fed and then moving them onto suppliers when they are large enough, there is a very limited market for these specialised fish. You can find yourself looking after more fry than you can handle so think carefully before attempting to try these fish for a breeding project.