This page explains how to raise Blue gouramis and answers FAQ; It also contains forum devoted to this species below the article. Additionally you should also visit the following pages since they're dedicated to this species too: Types of Gouramis and Profile of Blue gourami with pictures and forum. We'd love to hear about your Gouramis! Use a form at the bottom of this page before leaving aqua-fish.net, please.

Blue Gourami, a labyrinth fish that usually grows to 10-12 cm (3.9 – 4.7 inch) and lives up to 8 years, originally comes from Malaysia, Vietnam and Thailand and is ideally kept in heavily planted large biotope aquariums (100 liters, 26 US gallons, 22 Imperial gallons) in pairs as they’re very territorial towards each other unless one of the two fish is of different gender. Females are aggressive as much as males, therefore raising several specimens in one tank can be achieved only if number of plants and decorations makes it impossible for two fish of same gender to see each other 24/7. Even though adult fish are aggressive, juveniles are peaceful and enjoy chasing each other around the tank. As they mature at the age of 4 months (they should be 7-8 cm = 2.75 inch long), one specimen requires approximately 50 liters (13 US gallons, 11 Imperial gallons) of water.

No matter how aggressive Gouramis are towards their own species, they’re generally peaceful towards other fish that aren’t big enough to fit their mouth. Even bottom dwellers such as Corydoras or small Tetras are safe with Blue gouramis as long as Gouramis were introduced to a community tank at young age. See the “Tankmates” paragraph for more information about compatibility.

A tank for Blue gouramis should comprise of many plants (including floating ones), driftwood and gravel that can be completely replaced with sand. In case you’d be willing to breed this species, rather setup a shallow tank as these fish are bubble nest builders and males look after eggs and fry, therefore it’s important not to overtoil the male – he’ll pick all eggs that fall down from nest, and if he had to look after nest that is located 60 cm (23 inches) above substrate, he would get tired soon. Suitable plants for a Gourami tank are as follows: Cryptocoryne balansae, Acorus gramineus, Rotala wallichii. Open swimming areas aren’t a must for Blue gouramis. These fish can be kept in tanks without any lid at the top because they’re able to breathe atmospheric air, however leave a gap of approximately 8 cm (3.14 inch) between surface and physical top of the tank because these gouramis are quite good jumpers even though they don’t tend to jump too often. Moreover open-top tanks are good in terms of maintenance and water changes.

As for pH and water chemistry, Blue gouramis aren’t very picky and will accept pH of 6 – 8 easily, however pH value must not vary on a random basis which can be secured by maintaining carbonate hardness at 4 – 6. They too accept a wide range of temperatures which can vary between 22 and 28 °C (71.6 - 82.4 °F) and doesn’t have to be that stable as pH. One of the most ignored details by fish keepers is a simple fact that temperature varies in the wild, thus cannot be considered constant. Daily temperature is greater than night temperature, bear this in mind. These hardy fish accept a wide range of general water hardness – make sure it’s between 4 and 18°N dGH (71 - 321 ppm, 1.43 - 6.43 mEq) all the time.

These Gouramis are omnivorous so they like flakes, live or frozen foods and other foods as mentioned below. In case you have lots of small guppies and you don’t know what to do with them, then do your gouramis a favour and give them some. A gourami that has been kept with no previous contact with guppies will consume them with great relish.

Food that is considered delicious by these fish is as follows:

Blue gouramis will pick food from surface, from mid levels of the tank, however they too don’t mind collecting food that has fallen to the bottom.

Blue gouramis are egg layers, thus they can’t get pregnant which is important to understand as newbies keep coming visiting aqua-fish.net and ask “What to do when my Blue gourami becomes pregnant”. Instead, eggs, once released, have to be fertilized by the male. The courtship process is initiated by the male once the female is ready to spawn which is easy to notice as her belly becomes rounded, much rounder than usual - Gouramis can breed once a month, however it’s not a rule and they breed that often only if they feel comfortable in the tank. Apparently a sponge filter (community or dedicated Gourami tanks can be filtered by external canister filters such as Rena, Eheim, Fluval) should be used in a breeding tank as it won’t suck newborns or eggs into filtration chambers. An air stone is a great addition to a breeding tank, make sure it's placed at the top close to the surface in order to avoid waves from being created – these could damage the nest.

The male will build nest on the surface, therefore floating plants are ideal for a breeding tank as they keep the whole surface stable. The nest can be as big as 10 x 10 cm (3.9 inch x 3.9 inch) which takes approximately 3 - 4 days to build, but nests are usually smaller; Once they’re ready to mate, male will take a female to a U shape, this is the actual stage when eggs are released. Immediately after release both fish will fall down motionlessly, a couple of seconds later they start breathing and swimming again.

Both parents will look after eggs, however the male will become aggressive towards the female as time goes by, so separating parents from each other is recommended in a case he keeps attacking the female constantly, additionally caves and other hiding places should be available for the female to hide in.

The eggs hatch in 25-30 hours, one can speed up the process if temperature is raised to 28°C (82°F). The fry should be fed infusoria and nauplii, and water changes should be frequent as the fry grow, especially during the third week, when the labyrinth organ develops.

Blue gouramis are territorial, as it's already mentioned above, and they live in social groups that can be characterised as hierarchical. There will be the alpha male and this is usually the most coloured and the darkest specimen in the tank. The low-position males are very bright and one can easily differentiate them from the most dominant male. Females are bright too, but they can grow as big as the most dominant male. On the other hand females are rounded in bellies which is because of eggs. The more eggs, the rounder bellies.

Let's emphasize it again, the aquarium should be heavily planted. Bear in mind that this fish’ origin is Asia, so make sure the flow of water is minimal. Juveniles might enjoy swimming in strong current, but adult fish aren't definitely that kind. 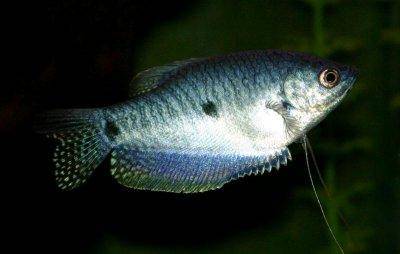 As many visitors of aqua-fish.net come here directly to ask questions, the most common questions are answered below. In case you can’t find solution of your problem on this page, you’re welcome to ask via form that can be found at the bottom of this page!