This page is about raising Ramshorn snails, about ways how they're introduced to tanks and how they become pests, controlling population of Ramshorn snails and there is also a forum under the article! If you're interested in aquarium snails you should also visit the following pages: Aquarium Snails, Mystery snails, Freshwater snail types. We'd love to hear your experiences with these species, so leave your comment after reading this and other articles!

Snails in an aquarium are not to everyone’s taste, a lot of fish keepers regard them as a nuisance that gets out of control, other keepers believe that there are good points out weigh the bad points so therefore they should be included in the tank. I have an open mind on this as I have kept them and still do but I can see both sides to the argument.

Ramshorn snails can include a variety of species of snails that all get classed as one breed in the aquarium trade, the differences between the snails is negligible so many keepers are quite happy with this general classification. Their shells are planispiral, this means that they are similar to a coiled piece of rope or a rams horn, hence the name that they are given.

They all belong to the Family Planorbidae which is the largest family of aquatic pulmonate gastropods; they can be found on most continents throughout the world. They are lung breathers, having no gills they have a large pulmonary sac for the gaseous exchange, this is found on the outer whirl of the shell, and if you shine a light through the shell it should be possible to see the air filled space. The air is collected and trapped by large folds of skin. Another distinguishing feature is that they only have one pair of tentacles which host an eye at the base of each. It is reported that the Planorbidae species can be hosts to pathogenic nematode worms but whether this is correct I cannot say.

Normally these are found with two different skin colourations, either black or red. The red colouration is the colour of their blood, unlike other snails that have a green colouration (this is caused by the presence of hemocyanin), these snails blood actually contains hemoglobin. The lack of melanin in the skin reveals the redness. Their shells can be found in a wide range of different colours, opaque right through to a dark brown or black, and with a mixed collection of these I think that they are very pleasing to the eye. 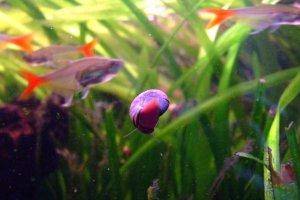 Introduction to the aquarium is often by them being brought in with aquatic plants as clusters of eggs or even juvenile snails, but they are also sold to keepers who purposely wish to use their tank cleaning abilities and prize them for this.

As it has just been stated they will rid the tank of algae, also cleaning surface algae of the plants, in general they will not actually eat healthy plants apart from the delicate species such as Cabomba or Anacharis.

They will travel about digesting rotting leaves or even any fish carcasses that have been missed so they are to me classed as part of a good clean up crew.

When keeping these as wanted guests in the tank fish like loaches or gouramis should not be added as tank mates, they are keen snail eaters and will wipe out any you have. Even adult apple snails are a threat to the Ramshorn snail so be wary if mixing the two.

Suitable tank mates are danios, guppies, and neon tetras, all of these are quite happy to share the tank with Ramshorn snails.

Once introduced into the aquarium they will breed prolifically, they are hermaphroditic, this means that if the tank only contains two snails they will manage to reproduce regardless of whatever sex they supposedly are. The red Ramshorn snail is not so common as it was a few years ago in the aquarium trade, there is a reason for this. Interbreeding with the brown or black Ramshorn snails has proved to be detrimental to the red snails as the brown/black snails seem to have more dominant genes, hence the higher ratio of brown/black offspring. If left to their own means they will reproduce away to their hearts content without the fish keeper having to get involved and as long as there are no predators in the tank they will soon start to over populate the tank. For serious Ramshorn snail keeping the water should be slightly alkaline with the temperature ranging from 75 to 80°F (24 – 26°C).

Their preferred diet consists of green vegetables like spinach or lettuce (this is best rinsed under warm water to break down the cells slightly), algae, and left over food from the fish. If kept with sturdy plants there should be no damage to the plants, try not to add the delicate species as they will damage them will looking for algae. If they are being kept in a breeding tank siphon any detritus on a regular basis and replace the water with treated fresh water.

When the clusters of eggs are laid, depending on the water temperature, they should hatch any time between 2 weeks right up to 5 weeks.

There are a couple of methods of controlling these snails if you start getting too many, or if they arrived in your tank as unwanted visitors. There are snail traps available to buy, these work quite simply by adding some food into a chamber that the snails can get into but can’t get out. Crushing the snails or removing the ones near the surface will prove effective in time, but the best way of avoiding them if you really do not want them in your tank is to check any plants that you buy carefully for eggs or juveniles. Rinsing the plants under water will help but the best method I have found is to give the plant a dip in saltwater for 5 minutes and then rinse, this should remove them.

In some pet stores there are available to buy Giant Ramshorn or Colombian Ramshorn snails, these are not the same snails as the small Ramshorn. They are actually a species of Apple snail, quite easy to spot the difference as these have two pairs of tentacles and will grow large. Adding these to your tank will mean the days are numbered for your genuine Ramshorn snails.

Feel free to visit Care of Ornamental Snails at firsttankguide.net too!