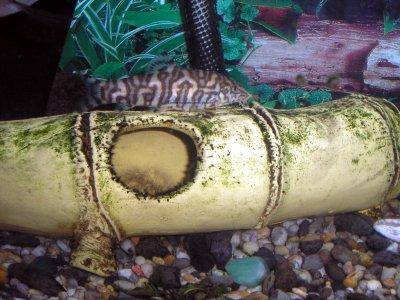 Yoyo loach is the common name of Botia almorhae (once called botia lohachata) that belongs to the botinae species, like clown loach. The fish was thought to have originated in Pakistan, though they are also found in India and Bangladesh, where almost all the botia we have in our aquariums are fished or live in big ponds for captive breeding. Yoyo loaches are mostly wild caught specimens as they do not breed easily in captivity.It has a rather interesting pattern and various strains of this form exist; Usually reaches 10 cm in length and it’s light grey body is characterized by dark spots that cover the entire fish from head to fins.Like other botia, the barbels at the sides of it’s mouth helps it to dig tunnels on the aquarium ground. Due its attitude is better to set up the tank with soft rounded gravel or sand, plants must be strong and can eventually be protected by stones or pots. Botia almorhae is a peaceful fish and can live in almost every aquarium, anyway it can be sometimes really territorial with other fish living on the ground, so house it only in big tanks not too much populated.Yoyo loach is more active during night, while during day stays repaired under plants or decorations, being a shy fish it is better not to have a strong lighting, or use some floating plants to shade the aquarium. Especially during night it can happen that they come under the surface to eat; anyway living on the ground they mostly eat the food fallen from other fish above, and other not floating product thought for them; the base of their diet can be constituted by common fish pellets and spirulina pellets.They require good quality water with efficient filtration. They are omnivorous and feed at the bottom of the tank thereby keeping the tank clean of uneaten food. They do best in medium to large planted aquariums, preferably with a sandy substrate as the species tends to grovel in the sand for these leftovers. The yoyo loach does best in a small group.

Thanks to Louise! Other pictures were bought from jjphoto.dk.