Before You Buy a Goldfish - Tips, Pictures, Answers and Forum

This page reveals all facts that one should know before purchasing Goldfish; You'll also find FAQ with answers attached at the end of the article and forum where we'd love to hear about your Goldfish! Share experiences or ask questions - we'll gladly answer!

Goldfish have been bred for over a thousand years for the sake of observation enjoyment. The art of breeding the finest specimens of goldfish first started in Asia and was later picked up in Europe. Breeders aimed to produce the highest quality of colors and shapes ever found on a goldfish. Because this type of fish has been bred so rigorously for all those years, you will never find one for sale that has not been born in captive breeding. An amateur aquarist could decide that he or she would like to raise goldfish in a pond or aquarium but there are a lot of factors to consider before getting started in this hobby. The beginner aquarist should first learn about the different types of goldfish to find out which varieties are hardy and easy to care for. A little bit of research as to what different varieties of goldfish to purchase and their specific needs is necessary for a successful pond or aquarium. Without the proper knowledge of water chemistry and conditions the inexperienced hobbyist might stumble upon some pretty devastating mishaps with their new pets. With a little bit of information you can make a well informed decision on what kind of goldfish you want to buy for your aquarium or pond.

There are many different varieties of goldfish and each unique trait is as valued as the next in the aquarium industry. Goldfish can possess over exaggerated features such as bubble eyes, hunched backs, double fins, round bodies, outstanding scales, puffy caps or nostrils, and fancy colors. Each and every goldfish variety is admired for its unique traits. Forgive me if there are a few varieties that I neglect to mention but I will try to cover them all in this article. The key to raising goldfish is, knowing the individual varieties, what makes them special and what their specific needs are. Once you have done your research, you can decide what varieties of goldfish are right for you.

The fancy goldfish with all the unique traits are much more likely to contract swim bladder disorder which is a condition in which the fish becomes disoriented and loses its ability to swim upright. The more a goldfish is bred to exhibit traits different from the common goldfish the less resistant the fish becomes to all the different diseases that can ail a goldfish. When searching for your new goldfish, be sure to observe their swimming ability for a little bit while still in the store. Although the fancier types of goldfish are not as graceful as other fish, they should still be able to swim around without too much trouble. Check all of the fins to see that they are still in tact and not shredded or rotten. Look at the eyes to be sure that they are clear and undamaged; if they look cloudy or uneven it would be best not to purchase the goldfish. Be sure to check that their gill plates are completely covering their gills; some fish are born defective with incomplete gill covers.

When choosing the right specimens to take home to your pond or aquarium, be sure to first observe the conditions of the tanks in the pet store. By looking closely at the store’s display tanks you will be able to see if the fish are well cared for and free of disease. If most or all of the fish tanks look diseased and unclean it would be best to move on to another aquatic retail store. If you purchase healthy, well cared for goldfish you will have a better chance at goldfish raising success. 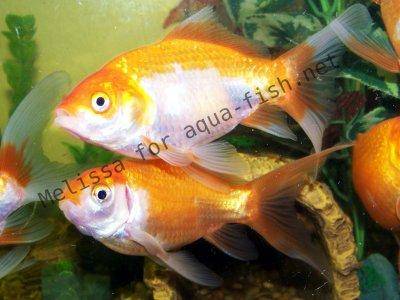 Undesirable colors on a goldfish 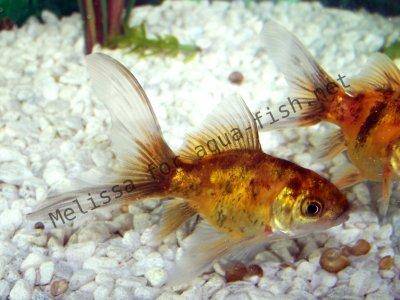 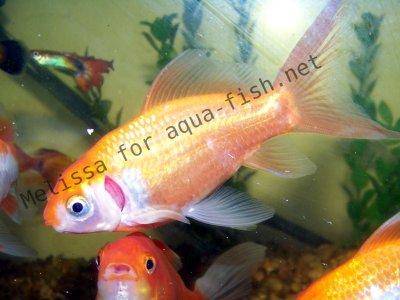 Recommended reading about Goldfish within Aqua-Fish.Net

On March 17th 2011 we've updated this page by merging questions that were originally published at aqua-fish.net/answers with the article above in order to put all information together. If you cannot find answer on your question within this page, then feel free to use a form at bottom to ask questions, share experiences or simply make suggestions! (some questions may be partially answered above)