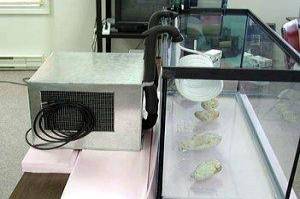 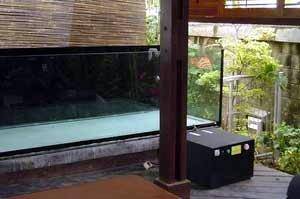 Aquarium chillers tend to be a piece of fish keeping equipment that lurks in the shadows with only a few keepers using them to their full potential, admittedly they are not required for all set ups but are quite common with marine tanks and in countries where the climate is very hot meaning that keeping the water temperature of the aquarium to the correct level can be a large problem especially in the summer months.

Some fish species, especially marine fish, require a constant water temperature so the correct mixture of aquarium chillers and aquarium heaters can provide this and keep the keepers mind at rest allowing the equipment to do the work for them. Allowing the water temperature to rise will increase the metabolism of the fish which means that they may breathe faster, higher temperatures can also decrease the oxygen levels in the aquarium, the combination of these two factors will cause problems as oxygen levels reach a critical low.

So how do aquarium chillers work?

Have you ever felt the heat from the back of a refrigerator when it is switched, these feel quite warm so how on earth do they keep the inside of the refrigerator cool, it is quite a simple process when broken down and soon makes sense. The most common types of aquarium chiller work by a probe sited in the aquarium water which also cools the water to a certain level that is set by the chiller itself. Other models may be plumbed in-line to the hoses of the filters but the basic principles are the same.

The chillers all haver a compartment that houses refrigeration gases, as these gases are compressed they will heat up and this heat is removed from the unit by some form of fans and dispersed into the atmosphere, the gas is then allowed to expand in a valve (commonly referred to as an expansion valve) as the gas expands it has the opposite effect to it being compressed and it cools down. The cooler gas is then passed though the probe if the first type of model mentioned is being used or of the latter is being used then a series of coils lower the temperature of the aquarium water, the water is passed over the coils for this effect to take place.

Like aquarium filters, the aquarium chillers are rated by means of the volume of water that they can cool efficiently, using a chiller that is not large enough for the water volume that your aquarium holds will mean that the chiller may not be able to cope with lowering the temperature to the level that you require.

The actual units may seem to be a pricey investment initially but if you are struggling to keep the water temperature down they are worth the money and surprisingly cheap to run, reliable models will run for years if maintained correctly so the cost does spread out over a long length of time.

Chiller units can start at a price of 100 pounds, some of the more expensive models will run into the thousands of pounds so it is wise to do a lot of research before purchasing a chiller so that you get the right model for your aquarium before you pay out a lot of money.

Are there other methods of cooling the water in the aquarium?

One method of cooling the water that is used quite widely is placing ice either directly into the aquarium water or placing ice into a container such as a plastic soda bottle and then floating this on the aquarium water. Yes this method will work straight away but it can only be classed as a short term solution as once the ice has melted the temperature of the water in the aquarium will rise again unless you wish to spend all of the day swapping ice bottles over and over.

Other methods include running small electrical fans over the surface of the water, yet again this will never be as accurate as running a chiller. Turning the lights off in the aquarium will also reduce the heat that is being absorbed by the water but this can affect the 24 hour cycle that the fish have adapted to.

When shopping around for an aquarium chiller it does pay to use a reliable supplier, these units can be purchased from auction sites but always check out the seller before purchasing.

Below is a list of some well known suppliers that can supply you with a unit.

These questions have been compiled from questions asked by our previous visitors.

What is the purpose of an aquarium chiller?

To chill the water in an aquarium. There are species of fish, plants, corals or live rocks that require constant temperatures that are far lower than usual room temperature. Even though chillers may be used to chill any tank, they're mostly used in the saltwater and brackish hobby as freshwater species are used to fluctuations of temperatures through the day.

Do I need an aquarium chiller?

In a case you're running a marine fish tank then it is very likely that one needs a chiller. This conclusion results from the fact that saltwater fish live in waters with very stable temperature (unlike freshwater species). If the species in your tank demand temperatures of less than 15°C (59°F) you'll definitely have to purchase this unit.

The second possibility when one needs a tank cooler is a coldwater aquarium. Some fish species (especially small ones) from rivers can be kept in home fish tanks, or in fish ponds. Naturally, it is hard to imagine a chiller connected to a garden pond. Fish from rivers are accustomed to temperatures of 5 (41) to 20°C (68°F), sometimes more. In order to maintain the temperature within some acceptable range, any such aquarium cannot be run without a chiller.

The third situation when a fish tank requires an aid of a chiller is too hot temperature (usually during Summer). To any experienced aquarist it is very clear that a maximum temperature of 30°C (86°) shouldn't be exceeded in an aquarium for a long duration unless there's a legitimate urgency for this (such as breeding or curing fish). If you cannot afford a chiller, use chilled water (put a bottle into the refrigerator), ice, or darken the room.

How much does an aquarium chiller cost?

There are units to be found for just $100 (the cheapest) up to $1400 (probably even more; the most expensive on the market). Here is a link which should help you to find one: on ebay.com (the link was valid on 29/10/2008, contact us if it doesn’t work any longer, please). Before you buy any, ask the seller about chilling as some smaller (usually characterised by lower wattage) chillers cannot cool the water enough. Then more units are needed to achieve the same effect as a bigger one could do easily.

How do I setup/install an already bought chiller?

It’s good to place a chiller somewhere to an open place due to ventilation. Otherwise it is hard to tell you some “general rules” due to uniqueness of each product, although they operate on the same principle. Always follow the guidelines provided by the manufacturer.

Do Goldfish require a chiller?

Yes, Goldfish are coldwater fish and unless you want to keep them unhappy, buy a chiller unit. Moreover, goldfish should be kept in garden ponds rather than in home fish tanks.

Does Axolotl need a cooler?

Not necessarily. According to an already existing article on Aqua-Fish.Net (this one : aqua-fish.net/articles/axolotl-care ), these beings lives in environment where the temperature varies between 10°C (50°F) and 22°C (71.60°F), however sometimes it is even lower than 10°C (50°F). Therefore if you’re sure that 22°C (71.60°F) is the highest possible during the whole year, then your aquarium doesn’t need a chiller.

Do aquarium chillers run all the time?

In order to keep the temperature stable it is endorsed to run a chiller unit 24/7 as they do have automatic regulation. If you'd like to simulate some creek biotope it's recommended to use a timer which will let the chiller work at night while it'll be turned off during daytime.

How big should be a fish tank chiller be?

The size doesn’t matter as it’s all about wattage and output, and flow rate. For example, compare these two chillers:

What is the best chiller for aquariums?

Although we don’t want to prefer any manufacturer, Oceanic seems to be very good. However, even Mercedes-Benz sometimes produces a car that shows problems after being used. Make your decision based on available funds, warranty, and availability.

Is it cheaper to run an air conditioner or a fish tank chiller?

This depends on the room and the amount of aquariums, but also on the size of aquariums. If you need to chill only a one fish tank, then an aquarium chiller is better. From what we know air conditioners usually need at least 1KW/h. If you had 10 small aquariums, then buying 10 chillers wouldn’t be wise since their price and their energy consumption would be higher than if you bought an air conditioner only. The following equation is recommended recommend to answer such a question:

cost of chillers + energy consumption of such chillers = y

If x is greater than y, then it is better to buy chiller(s), otherwise buy an air conditioner. Also bear in mind that each air conditioner operates for a limited space. So if a room is 10x10 metres (32 feet) big, then it is usually needed to buy at least 2 air conditioners to chill the air to the desired temperature.