This page is dedicated to raising and caring for Paradise fish; All aspects of housing these beautiful fish are covered here; From sexing, through breeding and habitat to feeding and water conditions. You're welcome to share experiences or ask questions at the bottom of this page! We also have these pages devoted to Paradise fish and you should visit them: Facts about Paradise Fish with plenty of answers and examples and Paradise fish - Macropodus opercularis profile with small forum.

Macropodus opercularis is a fish in the anabantid group that is most commonly known as the Paradise Fish. These fish, along with betta and gourami are all characterized by their ability to breathe atmospheric oxygen with the help of an accessory organ known as the labyrinth organ. This organ allows them to be able to live in waters that are murky and depleted of oxygen where most other fish would never survive. Paradise fish have the reputation of being very hardy and easy to care for, all the while being very attractive ornamental pets. They are in high demand in the freshwater aquarium industry.

Paradise Fish have oval shaped bodies that are laterally compressed. The mature adults can get as long as 4 inches. These fish are beauties to look at with their vibrantly colored vertical stripes of bright orange and shocking blue. The long flowing fins of the Paradise fish make them one species that is highly desired in the aquarium industry. There are several species variations of the paradise fish: 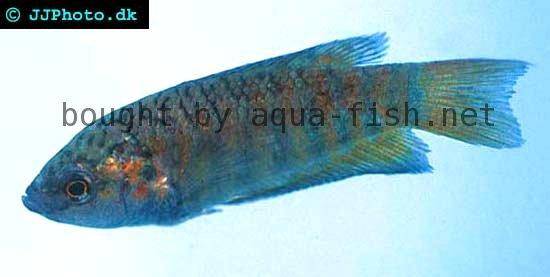 The labyrinth organ is an accessory organ used by the fish of the anabantid group to breathe atmospheric oxygen. The labyrinth is composed of lamelli, or folds of skin that are equipped with a lot of little blood vessels for absorbing oxygen in the gaseous form. This structure is located in the fish’s head just behind the gills. The fish will gulp air at the surface of the water and push the oxygen into the labyrinth organ expelling the leftover CO2 through its gills. Although Paradise Fish are capable of breathing atmospheric oxygen, they still need to remain submersed in the water for lubrication purposes.

Paradise Fish are native to areas in Asia as most anabantids are. Paradise fish come from the freshwaters of East Asia, the Korean Peninsula, and Northern Vietnam, and they are generally found in murky, low oxygenated bodies of water where you would never expect a fish could survive. These fish along with gouramis can be found in rice paddies and irrigation ditches where the water can be a wide range of temperatures, cold or warm, but especially warm waters where the oxygen levels are too low for other fish to survive.

Paradise Fish are not very particular about the conditions of their water. As mentioned before, these fish have the ability to survive in uninviting situations where the water is dirty, stagnant and oxygen depleted. In fact, Paradise Fish will even thrive in a stagnant container of stinky water that mosquitoes would be inclined to use as a breeding ground. They would feed on the mosquito larvae on the surface of that water and be quite happy living in that container. Although these hardy fish require very little care, there are optimal conditions to help induce spawning. It helps to keep their water temperature between 68 and 79°F, with a pH from 6-8 and soft or hard water. The aquarium should be densely planted to provide an escape for the female because the male will get very aggressive if the female is not yet ready to lay her eggs. Plants that reach the water’s surface will also help when it comes time for the male to build his nest. He will use the plant as an anchor for his tiny little mucous bubbles which he will use to form his nest. 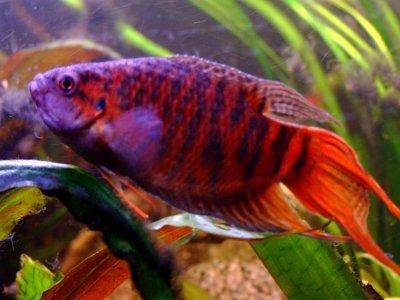 Much like many of the other anabantids, male Paradise Fish will be very aggressive toward other males, but not as severely belligerent as the male Siamese fighting fish. Male Paradise fish should be kept singly to prevent harm to any others. If male Paradise Fish are kept with other male Paradise Fish there should be an abundance of space for separate territories, as well as plenty of hiding places. It has been observed that two males can exhibit homosexual behavior if they are kept in a large aquarium without any females present. Once a female was added to the aquarium the homosexual behavior stopped. Paradise Fish should never be placed in a fish tank with slow moving fish or fish with flowing fins. These fish are likely to picked on or even eaten by the feisty Paradise Fish. Female Paradise fish are not as aggressive as the males are and should only be paired with the males when she is ready to spawn. When she is placed in her mate’s tank be sure to watch the pair carefully to be sure he is happy with her because if he is not, she will be mangled or maybe even killed. The male Paradise fish should be kept in an aquarium or fish bowl where he cannot see any other males. If they are visible to one another they will display their aggression by fanning out their fins and gills, and then attempt to attack one another through the glass. Constant aggression will eventually wear on the fish and stress him out. It is suggested to bring out a Paradise Fish’s aggression once a day for the purpose of exercise. If you have two males, set their bowls together so they can see one another for a short period of time. If you only have one, set a mirror in front of the bowl where he can see himself. This will trigger his aggression as if he was seeing another male.

Paradise Fish enjoy a good meal of mosquito larvae or ramshorn snails, but they also need veggies for a well balanced diet. Spirulina is an excellent provider of so many much needed nutrients and it also helps enhance the color of fish. Consider alternating flake foods with live foods and algae wafers containing spirulina for a well balanced diet.

Male Paradise Fish have brilliant colors that stand out much more than females. The males also have longer flowing fins, sometimes with long serrated rays which they use to attract the attention of females when they are ready to breed. Females are slightly smaller and have shorter, rounder tails and fins with no extending rays.

If you want to trigger the male’s spawning behavior try turning off the aquarium filter or any device that will cause currents to disturb his nest. Start feeding him a high protein diet of mosquito larvae, brine shrimp or bloodworms. Feed the female the same high protein diet to prepare her for egg-laying as well. When the male Paradise Fish is ready to breed he will begin building a bubble nest which he fashions out of bubbles that he has coated in mucous. He will likely find a broad leaf or some other vegetation to build his nest under. When he is satisfied that his nest is ready to receive the eggs the male will display for the female to entice her to spawn. If she is not ready for the male he will become very violent and is likely to mangle her and possibly even kill her. At this point be sure she has plenty of hiding places to retreat to. If you are able to remove her from the aquarium and put her somewhere else it would be a good idea to do so for a few weeks until she can prepare herself to spawn. Once she is ready to spawn, place her back into the aquarium with the male. He will take her under the bubble nest, wrap his body around hers and flip her upside down. When the female releases her eggs they will float to the surface because they are filled with oil which is buoyant in water. Once the female is finished laying her eggs and the male is done fertilizing them, he will tuck all of the eggs up into the nest and add more mucous bubbles to the bottom in order to prevent the eggs from falling. At this point the female needs to be removed again or the male will attack her in his effort to defend his nest. The female will have no part in parenting from here on.

Paradise Fish eggs will take 24-48 hours to hatch and another few days to absorb their yolk sacks. Once the fry have absorbed their yolk sacks they are ready to eat first foods such as infusoria or Hikari First Bites. After a week the baby Paradise Fish should be big enough to eat meals of newly hatched brine shrimp and micro worms. Because the fry are so small it would be a good idea to have minimal suction on your aquarium filtration system or use a sponge filter so the babies are not sucked into the filter. Provide them with a safe place to hide from predators or move them to a nursery aquarium if it is at all possible.