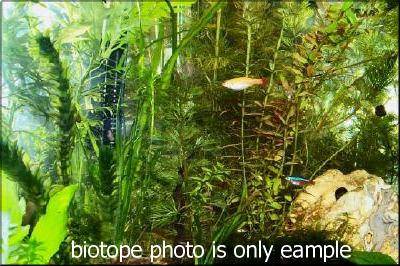 Madagascar is a large island in the Indian Ocean off the south eastern coast of Africa. This island hosts many plant, fish and animal species that are purely endemic to it. It was originally joined to Africa but split away 160 million years ago. A lot of the current habitats are under threat as more and more of the natural landscape is being converted to paddy fields for the cultivation of rice. As deforestation is occurring at a fast pace erosion is starting to increase along with the introduction of exotic fish species like the snakeheads and mosquito fish, the endemic species of fish are starting to decline rapidly. Some of the species are even thought to be extinct as no reported sightings have been made for several years.

Tilapias were introduced to the rivers and streams as a food source but due to their aggressive nature they have displaced many of the native cichlids.

Setting up the biotope

Temperatures should be set between 24-29°C depending on the livestock you are adding. Due to the large temperature range always research the fish you are going to add.

The rivers and streams on Madagascar have sandy substrate with earth banks and lots of plant life so the substrate should be fine silica sand or fine gravel.

Lighting should be bright to give the desired effect but a steady current in the water is needed so it is advisable to dampen down the water flow on the filters with spray bars if possible.

Suggested plants for the biotope

Background to middle planting can be achieved with Aponogeton Bolvinianus, this can grow quite tall, up to 30” in its own habitat but in an aquarium it rarely exceeds 20 “.

Bacopa Madagascariensis also makes a great plant for the middle of the tank, but reserve a place in the middle for a specimen plant like Aponogeton Madagascariensis commonly known as the Lace plant. This is getting hard to find in its own habitat but they are available to buy, the shortage does reflect on a higher price though.

For the front of the tank add some clumps of Blyxa Auberti mixed between random pieces of driftwood.

Another good specimen plant is Cyperus Alternifolious; also know as the umbrella plant. This is closely related to papyrus and can grow quite tall.

Bedotia Geayi is a rainbow fish that is endemic to Madagascar, commonly known as the red tailed silverside. Adult size of this fish is 3.5 inches and it prefers temperatures around 24°C.

Cichlids like the Paretroplus family can be added, there are a few species of these to use but these may need to be ordered from a specialist supplier.

Killifish are a must with their beautiful colorations, lots of variations to choose from and easily available to purchase.

Freshwater gobies are found everywhere in Madagascar, brackish species are also to be found in the river tributaries.

If you are planning to add cichlids from other areas of the world, research them first as they may attack or even eat the smaller inhabitants of your tank.

Here below is a list of all other biotopes available at Aqua-Fish.Net

If you'd like to ask a question regarding setting up a Northen Madagascar biotope tank, please use a form below the list to do so.