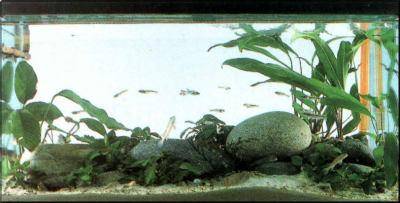 The Congo (Zaire) river has the second largest volume of water of any river in the world, yet it is classed as the most powerful river in the world due to massive water currents that exist in certain parts of it.

It is estimated that 1,500,000 cubic feet of water pass through its mouth every second.

It begins its journey with peaceful water current but along its path it gradually widens and the water current increases in speed. There is a 75 mile length of rapids that are impassable by the river, traveling on land is the only way through.

The most famous region on the river has to be Livingstone Falls; the rapids extend for 220 miles in this area. Similar rapid conditions do appear on other African rivers but not with such intensity. This biotope is based on the Congo rapids but obviously only to a certain extent.

Setting up the tank

The recommended size of tank for this biotope is 200 liters (44 gallons). The water needs to be highly oxygenated to create the rapid turbulence; therefore the water in the aquarium should be well-aerated with an airline. Leave plenty of swimming space but adding large river rocks for effect works well. The substrate should be fine gravel or sand. Creating the water current is not too difficult, placing the spray bar from an external to one end of the tank will work, and another option is to add a power head to give the same effect. I have seen some set ups where the current is provided by two sponge filters taking in the water which is then passed by means of piping to two power heads at the other end of the tank, this gives out a very strong current indeed.

Plants for the tank

Not many plant species are capable of surviving the strong water current, only use hardy plants that are well anchored or protected from the water current. The only plants really suitable for this biotope are the African Water Fern and the Anubias species. One way of anchoring the Anubias is to attach it to a length of slate with fishing line until its roots attach, the slate can then be hidden beneath the substrate.

Fish for the tank

Eutropiellus (African glass catfish) will love the strong water current and is a very peaceful species. This species is best kept in groups of six or more, solitary glass catfish do not fair well in the tank.

Syndontis catfish contain several species that can be found with wonderful markings but they do like hiding places in the tank with some floating plants for shade.

Distichodus added for interest, these are sometimes referred to as clown tetra, but don’t let the name fool you, these fish can grow up to 15 inches in length.

Lamprologus are African cichlids, there are many species but most do not grow to a great size but they all have character as do most cichlids.

Here below is a list of all other biotopes available at Aqua-Fish.Net

If you'd like to ask a question regarding setting up a African River Rapids biotope tank, please use a form below the list to do so.