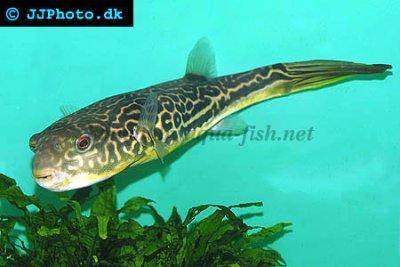 Pufferfish have always had a great popularity amongst fish keepers. They have the ability to inflate themselves to a larger size with the aid of water or air and they also have the ability to blink which is unique amongst fish species. They possess eyelids which just adds to their charms. It should be noted though that pufferfish species are not as cute as they look, they can be highly aggressive in the aquarium and having developed a hard beak from their front teeth, their bite packs a punch.

The Giant pufferfish belongs to the family of Tetraodontidae which means that their bodies contain the neurotoxin tetrodotoxin so these fish need treating with respect. They are sometimes referred to as the giant green puffer or the mbu puffer but they are all the same species of fish. The giant pufferfish earns its common name as mature specimens can reach a length of up to 30 inches (76 cm) but in the aquarium they are usually slightly smaller.

Due to their large size they are out of the scope of most fish keepers as a very large aquarium is required to house them correctly, they are more likely to be found in public aquariums rather than in private homes.

They display camouflage markings over the whole of the body which are usually brown in colouration with the background colour being a pale yellow or ivory depending on each specimen.

These are a long lived species and if housed correctly the average lifespan is estimated to be 10 years.

Sadly these fish are often sold as juveniles but they will soon require a larger aquarium.For an adult specimen you will need an aquarium that is at least 8 feet (240cm) in length and 3 feet (90cm) wide. Sand should be used for the substrate with the addition of rocks or wood being optional. Live plants can be added but they may get nibbled.

The water should be well optional and keep the temperature between 24-27°C (76-81°F). The pH should range between 6.6-7.3 and the lighting should be moderate to high. All pufferfish are high waste producers so regular water changes are a must, 10% weekly is the minimum so with such a large aquarium this can involve a lot of work. Due to their highly aggressive nature it is best to keep a single specimen rather than adding tankmates which will be quickly harassed and injured.

The Giant pufferfish requires lots of meaty foods and shellfish are a must. Their beak is constantly growing and crushing the shells will help to keep this trimmed down. Snails and molluscs still in their shells are ideal as well as other treats such as crab legs. They will also relish treats of chopped earthworms and prawns to keep them healthy. Any uneaten food should be syphoned out of the aquarium after feeding times as this will quickly decay and lower the water quality.

There are no visual differences between the sexes.

There are no reliable reports of the Giant pufferfish breeding in the aquarium, this is mainly due to the size of the breeding tank that would be required. It is known that the males make shallow circular pits in the sand and invite the females in to spawn and deposit their eggs. The males are believed to show all parental care with the female leaving the nest once spawning and fertilisation is complete.