This article explains how to care for Blue ram cichlid in fish tanks and it contains forum for sharing experiences too. We'd like to hear about your Blue rams, so make sure that you tell us your story - via the form that is at the bottom of this page! In addition consider visiting the following pages: Ram cichlid - Mikrogeophagus ramirezi profile with forum and Bolivian ram - Mikrogeophagus altispinosus profile.

The Mikrogeophagus ramirezi is a popular fish known by their common names: Blue ram, Dwarf cichlid, or German ram. This freshwater species is part of the cichlidae family and is considered to be one of the more peaceful cichlid species. Blue rams are originally found in South America in the Orinoco basin around Venezuela and Columbia, though they are now raised and bred in different parts of the world. They are named “Blue ram” for their brilliant blue colouration located on each side flank. The wild caught specimens tend to exhibit more dramatic colours than the aquarium bred varieties.

M. ramirezi is a warm water species requiring temperatures between 78 - 85°F (~ 25 - 29°C). They prefer a neutral to acidic pH of 5.0-7.0, and a low mineral content which means softer water. Typically, they live in habitats with plenty of woody hiding places so the wood found in their habitat leaks tannins which soften the water. It is a good idea to add pieces of aquarium wood to a tank featuring this particular type of fish. Blue rams require at least 20 US gallons (~ 75 litres, 16.65 Imperial gallons) of very clean and clear water. A well planted aquarium with a few logs is a must for these fish because they will get aggressive if there are not enough territories or hiding places, especially when spawning. Although these fish are very peaceful, they are not always the easiest to care for. They live an average of 2 years and sometimes even as long as 3 years, if they are provided with the highest quality of care.

Blue Rams are omnivorous and they accept any of the store bought fish foods such as flakes, freeze dried, and frozen foods but they prefer to be fed live brine shrimp and worms. Some veggies should be incorporated for a well balanced, healthy diet. Blue rams can be prepared for breeding with a combination of fresh, clean water at the right temperature and a well balanced diet.

You can keep blue rams in a species tank but only if you can provide them with well established territories. Each pair should get their own breeding area and safe haven where they can escape the other breeding pairs. If you want to keep them in a community tank they go well with other fish that can survive in their water parameters. Since rams are sensitive to water conditions, the rest of their tank mates need to be able to adapt well. The other fish should not be too aggressive or energetic or the rams will get stressed and you will soon begin to see their health start to decline. Cherry barbs, corys and pencil fish are good examples of fish that can be kept with rams.

Rams are susceptible to the common fish disease known as ick, especially the gold variation of the ram cichlid. They do not do particularly well with medications or chemicals. It is best to keep a little amount of salt in the aquarium water as long as there are not fish with sensitivity to saline in the tank. If a Blue ram’s community tank mates are sick and need to be medicated, the blue ram should be moved into a temporary quarantine tank until the medication is removed from the aquarium. The other thing to watch closely for is the amount of nitrates in the water. Although most fish cannot handle large quantities of nitrates in the water, the blue rams are slightly more sensitive to it. Be sure to perform frequent partial water changes and provide good filtration for optimal health benefits.

There are different variations of the ram as a result of selective breeding. The various strains might exhibit one or more varied physical quality such as a golden colouration, long fins, and a balloon shape.

The blue ram is sexually dimorphic which means the males look very different from the females. The word “dimorphic” is a Greek word that literally means two forms, so the males have different physical characteristics than the females. The males are usually larger in size and can grow up to 3 inches (7.62 cm) in length. The females are slightly smaller when they are full grown. The males develop longer fin rays on the front of their dorsal fins while the females fin rays are shorter and less developed. There are also some slight variations in colour; the females are pink on their abdomen area which tends to be a little rounder than the males.

Blue rams form monogamous pairs when preparing to reproduce. Start with at least 3 young males and 3 young females and then just let them pair up naturally. Once the pairs are formed be sure to provide plenty of separated territories or the strongest pair will eliminate any of the others who might be competing for the same space. Raising the temperature to 88°F (31°C) might help trigger the spawning process. When a pair is ready to spawn they will prepare a smooth surface upon which the female will lay her eggs. As the female lays her eggs, the male follows behind to fertilize them. These parents have the reputation to eat their eggs and their babies so you might want to remove the pair once the eggs have been fertilized. Otherwise, you could take your chances that the spawning pair might actually exhibit good parenting as most cichlids tend to do. It might be that blue rams bred in captivity no longer retain their natural instincts to protect their young. If they are still instinctual parents the male and female will both take turns fanning their eggs and defending their territories. A well conditioned female will lay as many as 500 eggs in one brood but typically the average is 300 eggs. The eggs take approximately 40 hours to hatch and it takes another 5 days for the fry to become free swimming.

Assuming the blue ram parents are not eating their young, the fry should be ready to look for food by the fifth day. This is when their yolk sacs have been absorbed so they will need other forms of nourishment. The parents will begin to escort their brood around the aquarium to forage for food. Feed the young rams a mixture of infusoria and microworms for the first couple of days, then newly hatched brine shrimp for a few weeks. After 3 weeks you should be able to feed the babies crushed flake food. This is when it will be a great idea to move the babies to an aquarium of their own so they do not have to compete for food and defend themselves. The parents will soon be loosing interest in protecting their young and might even start to see their off spring as food. By moving them to their own tank, the young blue rams will have a chance to survive and grow into adults. 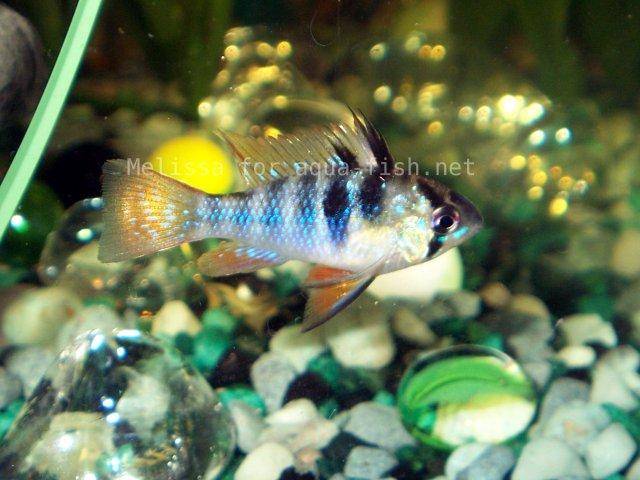 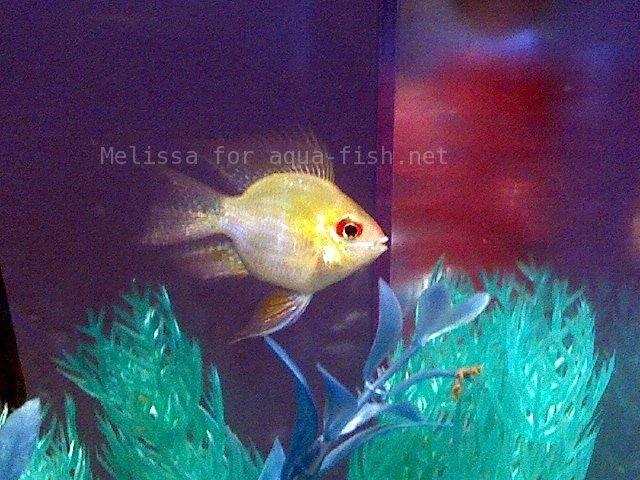