Pictus Catfish - Forum & everything about care

Advice by Susan, fishkeeper since 1996

This page is an ultimate guide on raising Pictus catfish; It contains information required for proper care and we also answer questions here! There is a form at the bottom of this page and we'd love to hear about your fish tank and your fish, so submit your story once you've finished reading! You should visit the following page too: Pictus catfish profile with large forum!

The Pictus Catfish is a very attractive species that is extremely popular in the aquarium industry and its scientific name is Pimelodus pictus. This is the ideal fish for aquarists who want to own catfish but do not have the space required to care for the larger varieties as the Pictus Catfish stays quite small unlike many catfish species that reach over 12 inches (~ 30 cm) in length. They can be purchased in aquarium retail stores for as little as $6.00 but they can also cost quite a bit more.

The Pictus Catfish comes from South American countries such as Venezuela, Peru, Brazil, and Columbia. They are found in both the Amazon and Orinoco River Basins.

The lifespan of this fish can be as much as 8 years if they are well cared for.

This species has a very active personality so therefore require plenty of free swimming space. The aquarium should be set up with plenty of caves made out of rocks and pieces of drift wood. Use a few leafy plants in the aqua-scape to add a little bit of extra coverage, both plastic and live plants are acceptable. This will help these catfish to be more comfortable and less shy. Because Pictus Catfish are bottom feeders, they should have a smooth, fine gravel or sand substrate that will not hurt their mouths while scavenging for food.

The P. pictus has a silvery, iridescent body with black spots along its back and sides. It has a whitish-silver bottom that is flat and perfect for bottom feeding. This catfish has a set of very long barbels that extend from the mouth, almost the entire length of its body. At full maturity, this species can be approximately 5 inches (~ 13 cm) in length, this should give you a good idea of just how long their barbels really are. They use these “feelers” to navigate their way along the substrate in the dark or murky waters. Pictus Catfish are also equipped with very sharp, serrated pectoral and dorsal fins which contain a poison that causes severe pain to those who are stabbed by them. This defence mechanism is not something that is used aggressively by these fish but it comes in handy when under attack. Mentioned fins tend to get caught in nets which can cause stress or injury so use a plastic container when trying to capture them.

The Pictus Catfish species is different from its relatives because they do not prefer to be alone like other pimelodids normally do. These active beauties are happiest when kept in larger groups and are considered to be a non-aggressive fish that can get along fine in the presence of other species of similar sizes but they are not to be trusted with smaller fish that can fit in their mouths. Bear in mind these fish may be aggressive enough to eat little fish for a tasty snack. Just like other catfish these are considered to be nocturnal, however they can still be active during the day especially when being fed. The best way to observe them is to set up night lamps to simulate moonlight in the aquarium and watch them at night. They are a very playful species who really enjoys moving, almost as if they are dancing as a group.

These fish are classed as a carnivorous fish despite the fact that they will eat just about anything you give them. Not only do they enjoy a good meal of worms, insects and frozen beef hearts, they will also accept algae wafers and flakes containing veggies. A Pictus Catfish needs to be well fed so be sure they are getting enough to eat at the bottom of the fish tank. Sinking catfish wafers can be purchased if you think they might not be eating enough.

Little information is known on how to reliably distinguish between male and female P. pictus. A mature female may appear plumper than the males when she is heavy with eggs, otherwise it is impossible to differentiate between the two sexes based on appearances.

There is very little information on the breeding process of this species. There is speculation that these fish are egg layers. Breeding in captivity has not been achieved.

The P. pictus is a great community species. They should be kept in groups of about 3 to 5. They can also be kept with other, moderately aggressive species that are at least the same size or larger. Smaller fish such as neon tetras will be viewed as food by these catfish. 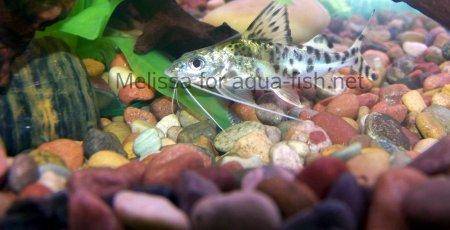