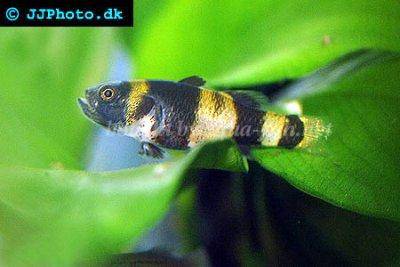 This brackish water fish can be found in rivers and estuaries of Indonesia, Thailand and Vietnam.

Bumblebee Gobies have a fairly short life span of up to 3 years.

The Bumblebee Goby is a brackish water species that can sometimes be added to a freshwater aquarium. Some aquarists have conditioned these fish to live in freshwater aquariums successfully but they do best in brackish water. Although this species is considered to be peaceful they are very territorial and should be provided with enough hiding spaces to guard.

The Bumblebee Goby thrive in a planted aquarium so never keep these in an open set up. Hiding places must be adding by using rocks or driftwood or even pots laid on their side. The aquarium must be large enough for the Bumblebee Goby to establish its own territory and also allow other tank mates room to swim away as this fish will defend its own area with high aggression levels. They can be kept with larger species and are not intimidated by them, they are certainly capable of looking after themselves. High water quality must be provided so regular water changes must be performed ensuring that the salinity levels remain constant throughout. Some keepers believe that these fish can live in freshwater conditions long term but this is not advised as they are much more suited to brackish conditions.

This carnivore’s favorite foods consist of live brine shrimp and bloodworms. Bumblebee gobies can be trained to accept a variety of dried or frozen foods such as beef hearts or various worms. It can be very tricky to get these fish to accept flake foods and they thrive much more on a diet of live feeds.The Bumblebee Goby has a reputation for being very fussy with their food and may not eat for the first few days when they are initially added to the aquarium. In time they should settle but they do need to be kept in small groups to give them more confidence when coming out for food.

When viewed from above the females will have a plumper appearance. Prior to spawning the males will display a much brighter colouration in a bid to attract the females.

The Bumblebee Goby needs a cave of some sort to spawn in. The female will appear plumper while the male’s black stripes will nearly disappear. To entice the pair to spawn, add some freshwater to the aquarium to simulate the rainy season. The male will guard the eggs which will hatch after 4-5 days. Just before the eggs hatch remove the parents from the aquarium to prevent the temptation to eat their young. Feed the fry a liquid diet of infusoria until they are large enough to accept newly hatched brine shrimp.