This page describes advantages and disadvantages of using LED aquarium lighting; Use a form at the bottom in case you'd like to ask or share experiences!

Over recent years there has been a lot of research carried out to help keen aquarists maintain their aquariums to the highest standard and as a result of this, there is now a lot more equipment available for us to use giving us more control on the daily running of the aquarium and therefore less mortalities in the tank and a wider diversity if fish and other aquatic creatures that we are now able to keep at home.

One area that has not been left behind is aquarium lighting, originally the only choice we had for the aquariums were bulky fluorescent tubes that required a separate ballast box for transforming the power source to the correct output and inevitably this lead to a bulk of wires trailing from the back of the tank. As the lighting systems evolved to meet demand from the customer, the fluorescent tubes became slimmer and more compact also giving out a greater output which still meets the requirements of most fish keepers today. There are certain set ups that still need more efficient systems that do not cost a fortune to run and emit powerful lighting for the aquarium, this is especially true in the case of the saltwater aquariums, mostly the reef aquariums where the corals are dependant on a strong light source for their health.

The next major development was the MH (Metal Halide) lighting system which proved to be extremely expensive to purchase and to run as they use a large amount of watts to produce the required lighting levels, this has resulted in the latest technology being researched, the LED lighting system.

LED lighting has been with us for many years, originally in the aquarium hobby, LED lights were added to the aquariums to produce lunar lighting as they cast a blue glow over the tank once the main lighting had switched off for the day, these small units use small lights in strips, often only containing 12 – 24 small bulbs for illumination. Ornaments for the aquarium can also be illuminated by small LED units but what was required was a LED unit that was as powerful as Metal Halides and cost a fraction of the price to run.

These units are now available and are already starting to prove to be very popular and reliable, many reef keepers have commented on the corals opening up more and displaying brighter colours when housed underneath LED lighting units.

As expected with all new technology, these units do not come cheap, they compare in purchase price to the MH units but they offer long life with the bulbs and they are a lot cheaper to run over a period of time. As more manufacturers start to sell these units, prices should drop, the competition will help with this but with all new products, a lot of money has to be invested in research and development and this has to be repaid with the initial costs of the units.

One such supplier of the LED aquarium lighting units is OC Reef, one of their featured units is the CREE 60 watt model which houses 20 bulbs, all rated at 3 watts apiece. Each of these bulbs has a 50,000 hours working life, bear in mind that standard T5 tubes need replacing every 9 months maximum. This unit is compatible with soft and hard corals, and the unit can be controlled by means of the standard on/off switch plus it has the built in feature of being able to dim the lighting and allow you to run the blue and white LED’s separately.

Digital timers are also built into the unit which can be crucial for reef aquariums as the corals and inhabitants do require a controlled daylight period everyday, more so than tropical tanks, and each unit is guaranteed for 3 years.

This particular unit is rated to reach depths of 48 inches in the aquarium, that is very impressive to say the least and the bulbs are rated at 10,000K for the white bulbs. This rating will supply adequate lighting for all corals and with using the dimmer switch you can reduce the lighting for fish only set ups and tropical setups if algae become s a problem.

One key point that I do like is that the LED lighting units run at cooler temperatures, this has to be a great safety feature, heat sinks and fans are built into the unit, these are placed at the rear so that they are out of view and the fan can be turned off when not required.

The aesthetics of this unit includes a choice of colours, namely black, silver and white, all of the units are powder coated to eliminate corrosion. The coating is finished with an easy to clean gloss coating.

As with most modern lighting units, the above LED lighting unit can be bracket mounted or it can be hung with the supplied heavy gauge wiring kit, always make sure that the unit is secured safe fully secured and that the supporting joists can take the weight of the unit.

Full details on the featured unit can be found at www.ocreef.com. 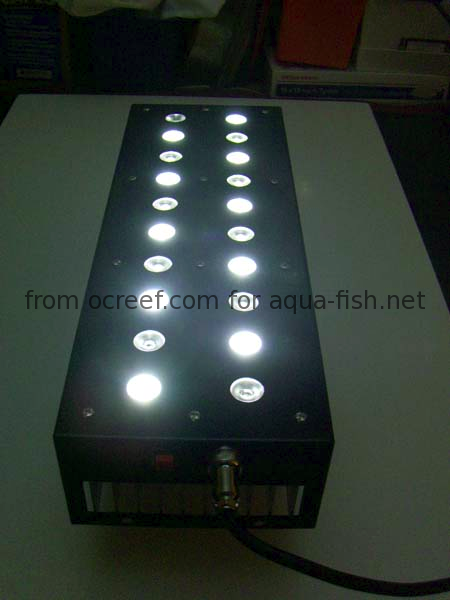 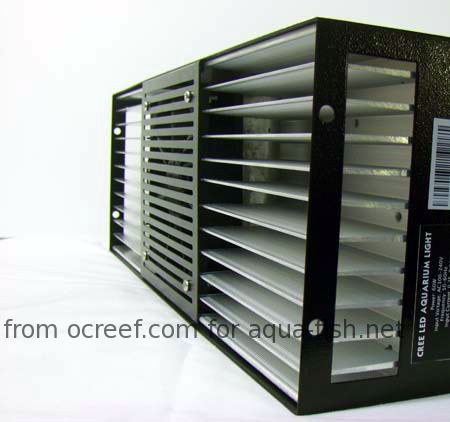