The article belongs to of our "exotic pets series" articles which are not dedicated to fish, but to Platymeris biguttatus - Assassin Bugs this time! Feel free to share your experiences regarding keeping this species at the bottom of this page!

Platymeris biguttatus are an intriguing little creature that have become very popular over recent years although to many people they may seem a strange choice of pet, keepers of these beetles will disagree strongly as they are fascinating to their owners and can be quite a talking piece to visitors to the house.

They are commonly referred to as Assassin Bugs and for a good reason which will be explained shortly. Platymeris biguttatus belong to the order of Hemiptera which contains thousands of different species which are found all over the planet but this particular species are to be found on the continent of Africa in the tropical forest regions where they prefer to live in rotting tree stumps or general decaying wood.

Adult specimens can reach a size of 1.5 inches and display legs that are banded with black and yellow sections.

They get their common name of Assassin Bug due to their needle-shaped mouth parts that pierce their prey and inject a deadly toxic saliva designed to liquefy their inners making it easy for the Assassin Bug to suck out the nutrients through the mouth, the design of the mouth parts means that they cannot chew, only use their mouth like a syringe. They also have another trick up their sleeve which can be used when they feed threatened, they also have the ability to eject venom from the end of their abdomens and their needle-shaped mouth can inflict a painful sting if you attempt to handle these creatures without the use of gloves.

They do possess wings that are exposed and not protected by wing cases as with other beetles, these only fully develop when the Assassin Bug moults to its adult size.

They are a very easy creature to care for if given respect and have few requirements making them an interesting and cheap pet for keepers but they are not recommended for inexperienced keepers due to the venom and sting that they can inflict.

As mentioned above these bugs are very easy to care for, less time is required for enclosure maintenance and their enclosure does not have to be very large at all due to the small adult size that they reach. They can be kept in small groups as long as plenty of hiding places are added for them to use, a group of 10 specimens still only require an enclosure that is approximately 18 inches long and 12 inches wide, this is a standard size for many small aquariums so using one of these could be ideal, if you are not using an aquarium then a plastic container will suffice or even a commercial plastic tank can be purchased.

Unlike reptile and spider keepers, the humidity level does not have to be high so a dry substrate can be used, the most popular choices seem to be vermiculite or just plain sand, this should be added to a depth of at least 2 inches and then hiding places must be provided. These can simply be pieces of cork bark or even tree bark that has been dried out thoroughly. The bark is laid on the surface of the substrate and of one piece is laid diagonally over another it allows for easy access to the hiding spot, always make sure that there are sufficient hiding places for all of your bugs.

Décor wise, this is all that is required to keep the bugs happy but be warned, always use a lid to the enclosure with sufficient ventilation, these bugs are excellent climbers and will escape if given the chance, make sure that the air holes are small enough to prevent this. As they hail from the tropical climates of Africa you may need to provide an artificial heat source, especially if you are from cooler climates and the room temperatures drop sharply through the day or night.

The ideal temperature range for these bugs is between 20-24°C (68-75°F), this is probably room temperature in most climates but just in case it is worth investing in a small heat mat that is controlled by a thermostat as a back up, this should be placed at one end of the enclosure so that there is a warm area and a cooler area allowing the bugs to decide for themselves in which area they wish to be at any given time. They will ingest moisture from their food so the addition of a water bowl is not necessary, however occasionally the may need a water supplement which can be provided by spraying a few drops of water onto the sides of the enclosure, the bugs will find these and drink on rare occasions.

Maintenance is very easy, the substrate can be left for at least a month before it needs to be cleaned or replaced and the bugs will stay attached to the bark when it is lifted out of the enclosure, the use of a spare container to place the bark while cleaning is being performed makes life a lot easier. Simply sieve or replace the sand if it is being used but make sure that you are not disposing of any eggs that may be there without your knowledge. The enclosure walls can be wiped down for clear viewing and that is basically all that is required.

In the wild the Assassin bug may attempt to prey on live foods that are the same size as themselves if not sometimes larger, they show no fear. In captivity it is much safer to feed live foods that are smaller than your bugs but providing the correct diet is not difficult. Their natural diet is other insects, grubs or caterpillars and basically anything they find that they can prey upon. In captivity they can be fed on meal-worms, crickets, wax-worms or even flies and caterpillars that are found in the garden areas, if feeding caterpillars make sure that they have not come into contact with any fertilisers or pesticides.

Feeding once a week should suffice unless you are keeping a larger group of these bugs, if deprived of food they may prey on each other so keeping a food supply available all of the time should prevent this.

Always remove any uneaten food that could spoil the enclosure or create a bad smell and if you are keeping younger specimens of the Assassin Bug, feed smaller food items such as fruit flies until they are large enough to cope with the same diet as the adult specimens. 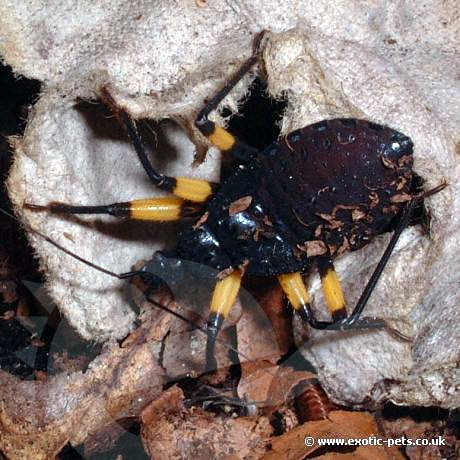 Breeding the Assassin Bugs is not a difficult process but raising the young requires a bit if care and special attention, specialised equipment is not required and is in the budget of most people.

Sexing the Assassin Bugs is not so easy, if you do wish to breed these then it is best to purchase a group of the bugs and allow them to mate naturally, it is believed that the females have a wider thorax but in some specimens this is very difficult to spot.

When they do mate the eggs will be deposited all over the substrate in the enclosure, at this stage you have the choice of removing the eggs or leaving them where they are, for a higher success rate it is probably better to separate the eggs into their own enclosure for hatching. To make life easier you can add a shallow dish filled with a damp substrate such as vermiculite as the Assassin Bugs prefer to lay the eggs in damper (damp but not wet) substrate due to the eggs and young requiring a higher humidity level.

The eggs are very dark and small when first laid but over a period of approximately three weeks they will change in appearance to a more reddish colour. Just prior to hatching the eggs will be totally red, this is a sure sign that hatching is imminent.

The hatchlings are referred to as “nymphs”, this is because they are hatched as miniature replicas of the adult specimens apart from the colouration. Their bodies will have a red colouration and the legs will be banded with black and orange bands. Once hatched the nymphs will need to be separated before they get the chance to prey on each other so a smaller container will be required to house each nymph individually. Finding containers for the nymphs does not have to be at great expense, plastic or polystyrene cups are ideal, simply place some damp kitchen towel in the bottom of these to provide the humidity and seal the top with the plastic lids provided with the cups and make a couple of small air holes for ventilation.

As mentioned in the feeding section the nymphs will require smaller food sources so fruit flies are ideal, once a day place the flies inside the rearing cup and let the nymph find the food of its own accord.

Moulting seems to come around very quickly, remember these creatures have an exoskeleton so the only way that they can grow is by shedding the old one to emerge slightly larger after each moult. Expect the first moult a couple of weeks after hatching and you will notice something straight away, after the moult the red body will be replaced by the characteristic black body and the legs will display the same colouration as the adults.

Keep the rearing containers well moistened and the juveniles will undergo several moults before the final moult where the two spots will then be displayed. Provide them with plenty of food, increasing the size of the meals as the juveniles grow but always make sure that the feeds are not larger than the actual Assassin Bug. When the juveniles have undergone their final moult they can be added back into the enclosure with the other adult bugs.

If you do need to handle the Assassin Bugs at all, always wear gloves, if the venom hits an open wound or even your eyes it is very painful indeed, always treat these bugs with respect and never startle them.

Never release the Assassin Bug into the wild, if you no longer have the facilities to keep these bugs then take them to a pet store that will accept them.

Picture included with full permission from:-