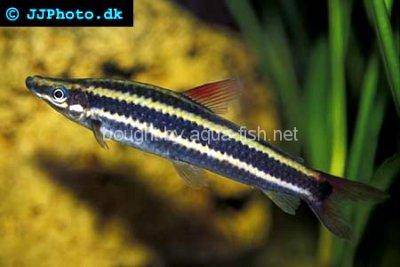 The omnivorous Striped Headstander prefers algae and plant matter but they will also accept a variety of live foods such as crustaceans, insects and worms.

Determining the sex of the Striped Headstander is hard to do when they are young, but mature females will be larger and plumper than the males.

These egg layers are difficult to breed in the aquarium setting but in order to do so they need to be conditioned through diet.

Anostomus anostomus can be found in the Amazon and Orinoco River Basins of South America. They live in areas of the river where it is rocky with swift currents.

Striped headstander is found in the quick moving rivers of South America so it would be a good idea to supply them with rapid water movement in the aquarium as well. Although these fish can be peaceful toward one another, quarreling may occur if there is more than 1 but fewer than 6.