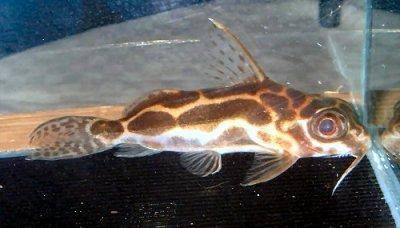 Robert’s catfish are found on the African continent where they mostly inhabit the River Congo waterways. They can also be found in the waterways of the rivers Lukenia and Egombe.

The Robert’s catfish are not seen very often in the aquatic trade and often can only be sourced by specialist suppliers. They are worth hunting down for as they are a beautifully marked and peaceful species making them ideal for peaceful community set ups. They belong to the family of Mochokidae and bear the Latin name of Synodontis robertsi. They can be recognised from other synodontis species by their very large eyes and bold camouflage markings. Their main body colouration is off white which is broken by patches of dark brown blotches which also appear on their anal and dorsal fins. Like all of the synodontis species they are not classed as a hardy species and do require high water quality to keep them long term. They are ideal for the smaller aquariums as adult specimens will only reach an average length of 3 inches which is a lot smaller than many of their close relatives.

As expected they are bottom dwellers so will require some swimming space along the substrate of the aquarium.

If cared for correctly Robert’s catfish is a long term investment with an expected average lifespan of 10 years. Many specimens have exceeded this expectation by quite a number of years.

The minimum sized aquarium that the Robert’s catfish should be housed in must be capable of holding at least 30 gallons of water volume and have a decent footprint to allow swimming space along the substrate. Sand or a fine gravel should be used for the substrate must make sure if using gravel that it has no sharp edges. These fish have barbels that can be easily damaged. The water temperature should range between 23-27°C (74-81°F) and keep the pH between 6.2-7.5. Make sure that the filtration system is rated for the water volume of the aquarium and perform regular water changes, at least 10% weekly.Hiding places should be added to the bottom of the aquarium by using rocks or wood and a few plants will make these fish feel more secure. Never add Robert’s catfish to a new tank set up, the aquarium should be fully matured with stable water parameters. Acclimatise them slowly and leave the lights off for 24 hours to let them settle quickly and give them the chance to explore their surroundings.

They are a peaceful species and should only be housed with other species of a similar disposition, characins and rasboras are ideal.

Robert’s catfish should accept all foods offered. Offer a quality commercial flake or small pellets for the staple diet and for extra vegetable matter you can offer blanched peas or chopped cucumber. They will also love treats of live or frozen foods such as brine shrimp or bloodworms but only offer these once or twice a week. Make sure any uneaten food is removed from the aquarium to keep the water quality high. If using pellets it is best to use the sinking variety to ensure that they get their fair share of food which they will scavenge from the substrate.

An extremely difficult fish to sex but it is possible by the venting method.

There are no reliable reports of Robert’s catfish breeding in the aquarium but it is known that the Synodontis species are egg depositors in their natural habitat.