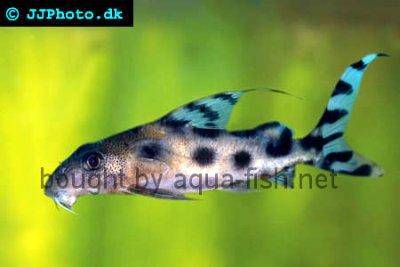 Generally not a fussy eater so quality flake, sinking pellets should be used for the staple diet. Decorated squeaker will also require treats of live or frozen Krill, blood worms, and brine shrimp.

Africa; Decorated squeakers are found in the Lower Congo regions of Zaire

Although there are no visible differences between the sexes, if the fish is turned over it can be vented.

As of yet, there are no reported cases of Synodontis decorus breeding in the aquarium.

The expected life span for Synodontis decorus is 5-8 years.

Add rock work, driftwood and piping to provide hiding places in the tank. Decorated squeakers are a peaceful species but have been known to eat tiny tank mates. It will hold its own against larger tank mates but avoid fin nippers who may be tempted by its extended dorsal fin. This fish can even be kept with the larger American cichlids.