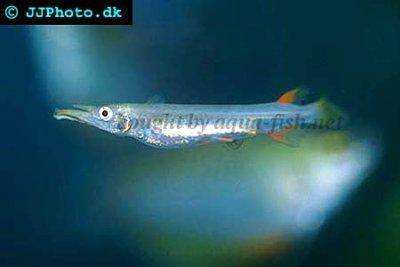 The Half Beak fish is carnivorous and prefer to eat foods such as mosquito larvae, insects, worms and crustaceans.

Half Beaks display a variety of breeding habits. The first technique is to lay fertilized egg then wait for them to hatch. The second procedure is to incubate the eggs inside the female so she can lay her eggs just before they are ready to hatch. The third method is to give birth to live young that feed off the female’s placenta instead of a yolk sac. Half Beaks tend to have smaller broods consisting of larger fry. The fry will remain under the mother’s care for up to 3 months.

Different varieties of Half Beak fish live in different bodies of water. Some come from the salty waters of the Pacific, Atlantic and Indian oceans. Other variants can be found in brackish or fresh water bodies in Singapore, Thailand, Indonesia, Malaysia and New Zealand.

This type of fish is unique because it can survive in salt, brackish and fresh water. Dermogenys pusilla earned its common name “half-beak” because its lower jaw is a lot longer than the upper jaw.