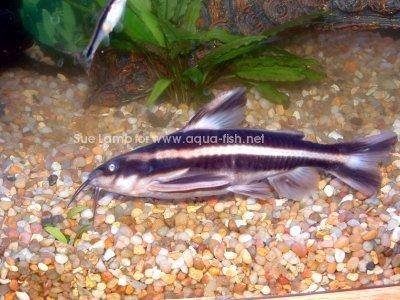 Striped raphael catfish were originally only found in Amazon and other south American waters, but they have been introduced to waters in the us states that border south America.

The Raphael Catfish are one of the larger catfish species that we can house in our aquariums so always be aware that when they reach their full adult size of approximately 7 inches they will require a larger aquarium to move freely in the space available.

They may take a few days to settle into their new home but once confident they will become very active, part of their confidence derives from their vast armament of spines that they posses, a definite defence that is avoided by many predators.

They are also referred to as the “talking catfish” as they have the ability to emit a croaking noise when they feel threatened, yet another defensive ploy.

Like most catfish, they are a nocturnal species so hiding places should be added to the aquarium to provide them with shelter during the daylight hours.

Even though they can be a confident species it is best not to house them with aggressive tankmates as this can make them timid if they feel threatened, they do best with other social species, following this general rule will make them more active in the aquarium.

Striped raphael catfish will do well on a diet of sinking pellets, blood worm and brine shrimp. It is best to feeds after the lights are out in the evening.

There are no known sexual differences.

As of yet, there are no records of Platydoras costatus breeding in captivity.

If kept correctly Platydoras costatus will live for up to 13 years.

Striped raphael catfish are a nocturnal fish but once settled in the aquarium will explore in the daylight hours. They do like to burrow so provide a substrate of very fine gravel or sand. Never attempt to catch these in a net, they possess spines on their sides which will get entangled, always try to catch them in a glass jar.