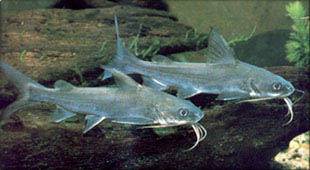 Arius leptaspis can grow up to 32 inches, keeping these fish long term is not practically possible cue to the size of the tank required. It is advised that these fish should not be purchased unless you have a very large aquarium to house them when they reach their adult size. They will tolerate brackish or freshwater conditions and spend all day swimming up and down in the aquarium. Due to the fleshy make up of their skin it is advised that any gravel added to the aquarium should be rounded, any sharp edges will easily injure these fish and the wounds may lead to infections in the long term. Salmontail catfish are mostly nocturnal but care must be taken when handling them. They possess a sharp spine on their dorsal and pectoral fins; also they are covered with mucus that is irritating to the skin. Although the Salmontail Catfish is classed as peaceful, they will attempt to eat smaller tankmates and as they mature this problem will increase due to their large size.

Salmontail catfish will accept sinking pellets; include some vegetable matter in their diet. They will also love the odd treat of meaty foods such as chopped shrimp or frozen foods, chopped fruit will also be accepted readily.

There are no visible differences between the sexes.

Due to the enormous adult size there are no reported cases of them breeding in the aquarium. In the wild it is known that the male takes on the parental duties guarding the nest while the eggs hatch and looking after the fry until they are large enough to take care of themselves. Broods can be up to 60 eggs and as with most fish species the fry will consume their yolk sacs initially and then become free swimming after 6-8 weeks. Once free swimming the fry will forage for their own food where they will consume zooplankton and other small food stuffs.
✗