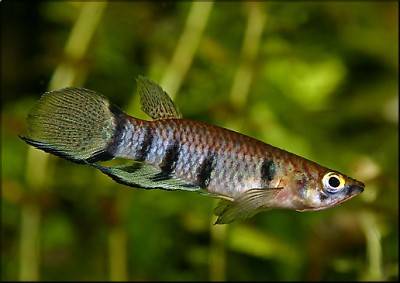 Red-chin panchax stay relatively small and can be kept in tanks starting at 15 gallons (54L). Group size should be at least 6 to prevent stress; try getting a few more females than males to prevent them from being chased around too much. Because these fish reside at the top of the tank, floating plants are much appreciated. In the wild, they are found in calm, dark and overgrown rivers with plenty of vegetation and slightly soft, acidic water. Imitating this in your own aquarium will help them feel at home. In an aquarium setup that’s too light and open, they’ll usually end up huddled together in a corner instead of showing their interesting natural behaviour!

Because red-chin panchax are quite active and become territorial as they age, they can’t be combined with just any fish, especially other surface dwellers. Larger schooling fish, catfish species and dwarf cichlids would make decent tankmate choices.

Up to 5 years, usually less.

Red-chin panchax are top-feeding predatory killies that will really appreciate live foods such as fruit flies and dwarf shrimp fry. You can also feed them frozen foods like mosquito larvae and most will also take commercial pellet and flake foods.

These killies show very interesting behaviour when kept in a suitable, planted setup. You will see the males courting by flaring their colourful fins, dancing with the females and chasing them and picking fights with other males to protect their territories. They are a joy to watch!

If your red-chin panchax are mature and healthy, differentiating between sexes should not be difficult at all. Males are bigger than females, have longer fins with more colour and feature the orange-reddish chin that got these fish their name. You’ll frequently see them chasing females and sparring with each other.

Red-chin panchax breed readily in aquariums and you’ll often see fry appearing without even trying. Parents lay eggs on plants. They usually hatch 9 days after being laid. If you’re trying to raise as many fish as possible, the eggs should be separated from the parents. The fry can be fed Artemia salina and eventually microworms. If you decide to keep the fry in the main aquarium, be sure to provide plenty of hiding places in the form of plants.

When it comes to temperament toward its own species, these fish are peaceful, though males will establish and protect their territories which can involve non-fatal fights.

Temperament toward other fish species is classed as peaceful, though will hunt dwarf shrimp.

Profile was updated on 10th January 2016 thanks to Aquariadise.com.