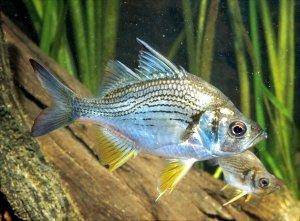 The Giant glassfish cover a wide area of South Asia where they can be found in India, Pakistan and even in some of the Australian waterways. They are primarily a freshwater species but can sometimes be found living in brackish water conditions.

The Giant glassfish belong to the order of Perciformes and the family of Ambassidae and are known under several common names including the Giant glass perch. They develop a large compressed body shape as they mature and have a relatively large mouth in comparison to their overall body size. As expected their body colouration is silver which may be broken with dark bars that run down their bodies. Their anal and ventral fins are usually yellow in colouration with the rest of their finnage displaying a dusky appearance. Adult specimens can reach an average body length of up to 11 inches so if you are considering caring for these fish you will need an aquarium large enough to give them ample swimming space. They also prefer to be housed in small groups making the need for room even greater. They have an extremely peaceful disposition and will not show aggression towards themselves or other tank mates.

If housed and cared for the correctly the average lifespan for the Giant glassfish should be expected to be at least 7-8 years.

Due to the large size of mature specimens and the need to keep these fish in a small group you will need a larger aquarium of at least 5 feet in length. They should never be added to an immature setup and should be acclimatised slowly to adjust to the water parameters. They are high waste producers so make sure that the filtration system is rated for the water volume that the aquarium holds and always perform regular water changes on a weekly basis of at least 10%. The water temperature should range between 23-28°C (74-83°F) and the pH should range between 7.0-8.0. Rocks or wood can be added for decoration although they will spend most of the time in the higher levels of the water column and the addition of some plants will be appreciated. They do require a high oxygen level in the water so careful positioning of the outlet nozzles from the filters towards the surface will increase gaseous exchange. They are extremely peaceful but should be housed with similar sized species as small tank mates could be seen as a food source.

Lighting levels can be moderate to high which will also benefit any aquatic plants in the aquarium.

The Giant glassfish are classed as a carnivorous species but the use of live feeder fish is not recommended as this increases the risk of introducing diseases into the aquarium and as such this practice is frowned upon nowadays. Although they are classed as carnivorous they will also accept quality flake or pellets but make sure that these have a high protein content and their diet will need to be varied with other foods. For meaty foods you can offer bloodworms as a treat a couple of times per week and brine shrimp will also be accepted. In the wild they feed on crustaceans so the use of chopped cockles or mussels that have been rinsed thoroughly will also provide the protein that they require.

Extremely difficult to sex as their are no visible differences between mature male and female specimens.

As of yet there are no reported cases of the Giant glassfish breeding in the aquarium, it is believed that in the wild they are egg scatterers and their spawning period is between June and July.