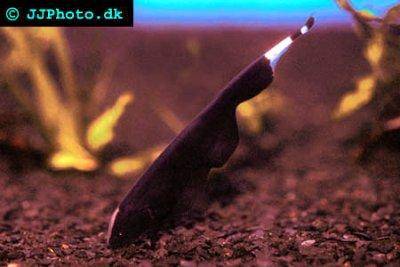 Apteronotus albifrons originally comes from the Amazon Basin in South America. They are to be found in dark waters running from Venezuela right up to the rivers of Paraguay.

The Black Ghost is mostly carnivorous but may accept peas in their diet. They prefer to eat foods such as bloodworms, beef hearts, brine shrimp and krill. They are not to be trusted with fish that are small enough to fit in their mouths. The Black Ghost does prefer to be fed after the lights have gone out in the aquarium as they are classed as nocturnal feeders. It is best to feed these fish twice a day so early morning and late at night should encourage them to have a healthy appetite. In time they should become tame enough to accept food from the keepers hands.

There is no way to determine the sex of Black ghost just by looking at it. Some keepers claim that the position of the eyes can be used to sex the Black Ghost, supposedly the female has her eyes more the the front of the head but this has yet to be proven.

Little information is known about their breeding habits in the aquarium. Successful breeding is taking place in Asia and Australia but information cannot be found about what their methods are.

The Black Ghost can live for approximately 10 years or more in the aquarium if they are well cared for and their water condition needs are met.

The Black Ghost is a very shy fish. Keep plenty of plants, some floating and some ground cover, to help this fish feel more at ease. It is a good idea to keep a short section of empty pipe in the aquarium for the Black Ghost to hide in. Apteronotus albifrons is sensitive to bright light and water conditions. The Black Ghost uses a weak electrical discharge to locate its prey.

As these fish grow quite large, up to 20 inches (~ 50 cm), the aquarium should be large enough to give them swimming space. The minimum size for an adult specimen should be at least 100 gallons (~ 454 litres, 120 US gallons). They are extremely sensitive to changes in water parameters so never add them to an uncycled tank and make sure that regular water changes are performed to maintain the highest quality.

The following question was added here on March 23th 2011 due to merging aqua-fish.net/answers with more popular related pages.

Which fish are compatible with Black Ghost Fish?

Answer: Black Ghost fish are usually only aggressive to their own species. If kept in a large enough tanks they should be tolerant of other species. Good companions are peaceful SA cichlids, pleco, and clown loaches. A lot of keepers put fish fatalities down to the ghost fish only to find that it was due to other causes.