This page covers dropsy disease in fish. We also have forum under the article so in case your question isn't answered on this page yet, we'll gladly answer. Sharing experiences and tips is welcome too! 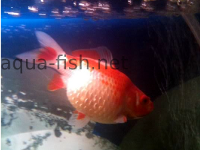 Dropsy is caused by bacteria which live in contaminated, but also in slightly contaminated water. The probability of getting this disease is higher if fish live in stressful conditions. This is because the stress negatively affects the immune system and fishes succumb this disease easier. What’s bad is the fact that this disease chooses it’s target slowly; Your fish will be attacked one by one, not all at one time. Naturally, the fist victims will be the weakest specimens.

The development of the dropsy disease

The disease opens itself as a bacterial infection of guts. You can spot it as fish’ excrements are covered by mucus. The gut mucous slowly dies, the fish accepts less food than usual and there are long, transparent, mucus-looking excrements hanging from the anal opening. The internal organs are getting smaller, they also die slowly and of course, they stop doing their function as well. The fish wants to eat, but it’s digestive system isn’t capable to consume it. This connects to saddles malfunction, infection of uric ways and other internal organs. Basically, saddles don’t filter the blood, so the fish doesn’t excrete redundant water from the body and this is why it gets filled with water as time goes by. The body becomes inflated, eyes become bigger and scales gap away. If you don’t start with treatment despite the fact that the fish looks horrible, the organs will completely fail and the fish will die in pain.

There are various antibacterial medicaments available on the market. It is necessary to feed them as the instructions say when you spot first symptoms. If the disease stage is a late one (fish is inflated and has big eyes), then it is necessary to separate the sick specimen and to provide the double amount. Of course, this treatment has it’s risk aspects as well. The antibacterial medicaments kill the disease, but they also kill the nitrification bacteria which are present in the filter. So that it is recommended to take the filter out from the tank during treatment. The best solution is to move the filter into another container with water where the bacteria will live without any problem.

Stress harms every living being including humans and fish. Any ordinary aquarium is very bad in the sense of stress because fish can’t escape from this area and they incline to diseases much faster than fish in the wild. And especially stress is the main generator of diseases because stressed fish can’t resist them because of a weaker immune system. Moreover, stress isn’t only the case when fish get scared, but it’s mainly the inappropriate care. For example, often changes of temperature. Basically, the temperature varies in the wild as well, but if it’s not periodical and normal, then it causes stress. So if you have 30°C in the tank during the day and 18°C during the night, it will probably affect the life in your aquarium negatively. And if you don’t do anything with such conditions, fish will become ill after a few weeks. Additionally, stress is caused by often moving from one tank to another aquarium, often changes of water chemistry.

What’s more, overfeeding and inappropriate feeding are just another causes of diseases. It’s because every fish needs balanced food, enough vitamins and minerals. Too much of one mineral and absence of another may cause fatal damages. Another reason of diseases is keeping incompatible species when one species harass another one. Overcrowded aquariums aren’t suitable for healthy life as well.

Basically you can help your fish to be healthy if you change water from time to time. Bear in mind that changing the whole water is not recommended. Instead, change 10%-20% of water. Also, feed your fish vitamin C which helps the immune system.