The Axolotl: One of natures wonders! Article & Forum

It’s not often these days that we come across a rarity in the local pet shop, but this week I found one. (Actually, it was two, a breeding pair no less!) 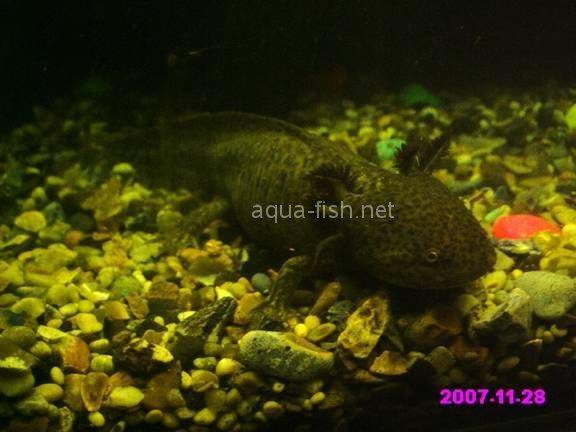 As long ago as 1996, these were declared “Critically Endangered” by the IUCN, iucnredlist.org and as such, are in need of help. The natural habitat has all but disappeared, so almost all the ones you find now are captive bred, and then very rarely seen.

Here’s a little of their background, for those who don’t know anything about them. It is well worth a little research to find out just what these amazing creatures are capable of.

The axolotl originates from the cold waters of the glacial lakes of Lake Xochimilco, and Lake Chalco. It is a close relative of the Tiger Salamander and indeed is part of the salamander family, with some major differences. It has refused to metamorphose to an amphibian, and retains its external gills throughout its life. It is also able to reproduce in what experts’ class as the larval stage, something their cousins don’t do until after they metamorphose.

Although they do not metamorphose naturally, some can be induced to do so through hormones or other stimulants being applied, although not all axolotls have the ability even then. Once in a while one will break the mould of course, as with all of nature, there are always exceptions! It is not recommended that you induce or try to induce metamorphosis, as even if they can make the change to amphibian, they don’t tend to live as long once they do.

They have a unique ability to regenerate, not just the limbs and tail, but even heart and brain cells! This has made them subjects of many laboratory experiments and possibly helped their decline, rather than helping to protect them.

Colours vary, even in the wild, ranging from near black to cream, with variations in between. The captive bred varieties are even more colourful, with white, albino and many other colours.

The axolotl name comes from the Aztec language "Nahuatl". A popular translation links the axolotl to the god Xolotl, who was a god of deformations! The most common translation of the name however is “Water-dog”, which is far preferable to the first in my opinion!

There are several theories as to why the axolotl stays water-bound, and some of the popular ones are that there is little for them on the land, should they move out of the water, as the native environment is mainly desert around the lakes, and there were no predators in the lakes where they are native, so there was no need for them to leave the water. Man has changed this though, both with development of the desert surrounding and also by introduction of fish to the lakes, all of which is detrimental to the axolotl.

As for keeping them in the home, there are several considerations that need to be addressed.

Firstly, the temperature of the water they are living in. This needs to be cold, and it may be difficult to keep the temperature low enough for their comfort. They are cold-blooded, and as such, the metabolism is affected by the temperatures they endure. If it gets too warm, their metabolic rate increases, causing them to eat more and become much more active. It also shortens their life and causes stress. Although reasonably resistant to infection, warmer waters encourage the bacteria and parasites that can cause them problems.

They do not mix well with other species. There are several reasons for saying this, and please, if you intend to keep them, take note of the following.

They need a good sized tank. They are strong swimmers and will “Pin-ball” around the tank at great speed, so a larger tank is better for their safety. Also, ornaments and plants should be minimal, as the more they have to negotiate round, the more likely they are to hit something or injure themselves. They should be supplied with a cave, pipe or similar to hide in. They don’t like strong light, so they need to be able to get into the shade during the day.

The substrate needs to be carefully considered. The axolotl eats by way of opening its large mouth very fast, causing a suction, sucking in anything in the vicinity, including substrate! Small aquarium gravel can collect in the stomach and weigh the axolotl down, stopping it from swimming to the surface and causing discomfort. It will eventually regurgitate this gravel, but while it’s there, it’s not comfortable.

Large or medium rounded gravel is better, because although it will still try to eat it, if it’s a good size then the axolotl will realize its mistake and spit it back out. Marbles have been suggested, but their smooth surface doesn’t help the filter at all, and there’s not a great deal of grip for the feet either!

A background inside the tank is probably the best type of décor. Either shop-bought or DIY, a 3D background will add to the aesthetics and give a little amusement to the axolotl.

Unless you live in a very cold climate, heating is not required. You may find that the opposite is necessary in warm weather and may need to install a chiller to keep the water cool.

Good filtration is very important. Axolotls are messy and create a lot of waste, so an ideal filter would be a HOB or canister filter with a large capacity. However, strong currents are not well received, so the outlet should be attached to a spray bar and aimed at the glass above the water line, to reduce the impact. Axolotls need clean water, and that includes no chlorine or other contaminants often found in tap water. Regular water changes are also a requirement to reduce nitrate buildup.

Lighting should be dim or in-direct. Direct sunlight should be avoided if possible. During daylight hours, lighting may not even be necessary. The axolotls are nocturnal, and most active in the evenings, so dim lighting well above the tank would be useful at this time. Keep the lighting high, so that it doesn’t heat the water. 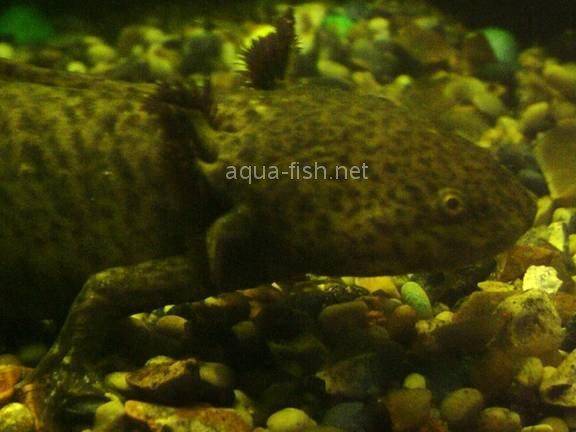 Axolotls are carnivorous, so need a well balanced diet of meat-based foods. Brine shrimp, bloodworms, earth worms, lean beef strips are all snapped up quickly, and some recommend catfish pellets too. The eyesight isn’t very good, but if it wriggles, they’ll find it. The axolotl has a set of teeth, but they are used for holding rather than biting, so any food has to be swallowed whole. This in mind, make sure that whatever you are feeding is small enough that your pet can take the whole thing in one go, as anything that is too big, it will just spit out and ignore.

Axolotls have a brain, and can be trained to feed from the hand. This is often the best method of feeding since you know exactly how much they are eating. Feeding should be in the evening, when they are most active. Remove any uneaten food quickly to avoid any water contamination from left-overs.

How often you feed them depends on what they need. Twice a week is often enough, but they will always ask for more too, so take note of just how much they eat and their size. Obesity isn’t just a human condition!

I have yet to breed mine, so it would be best to consult other research here of people who have successfully bred their axolotls. Here is everything you need to know, and the author has a wicked sense of humour too!

These creatures are surely one of natures most wonderful creations and they deserve the chance to survive, even if this means in captivity. I for one will be doing my best to help protect them, both by creating a breeding program for them, as well as letting others know about them. If you have come across any in your local store, take some time to look and appreciate these beautiful creatures, then try to make room in your home for them!